“I Adore My Lesbian Daughters / Keep Them Safe.”

For many New Yorkers, this sign has long been an instantly recognizable sight among the sea of faces at the NYC Pride march every year. It was held by Frances Goldin, 94, a mother of two lesbian daughters who began attending the march in 1971 ― the year both of her daughters came out. 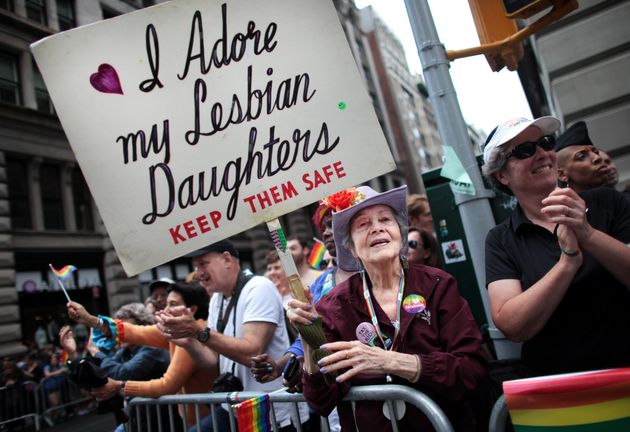 Given the COVID-19 pandemic, 2020 is the first year NYC Pride has been cancelled in 50 years. It’s also the first Pride without Goldin and her sign in 35 years, CNN reports; she passed on May 16, at the age of 95, due to natural causes.

Fans of Goldin and her sign have taken to social media with photos of her at the Pride March. Photographer Daniel Albanese shared one of the proud mom from 2016.

“I’ll forever miss seeing her smiling face in the crowd,” Albanese wrote under his post.

“When I [first] saw the reaction from the marchers to my sign, I was incredibly moved,” Goldin told HuffPost in 2018. “People would run up to me with tears in their eyes and thank me for being so supportive. They would say ‘Will you call my mother/father? Will you be my mother??’ These kids are so desperate for their parents to love and support them for who they are.” 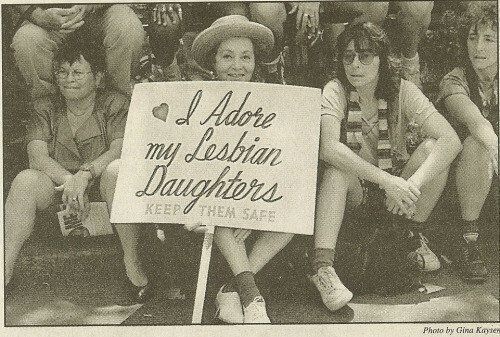 The reception to the sign ― which originally just read “I Adore My Lesbian Daughters” ― inspired Goldin to return to the Pride march year after year. She decided to add “Keep Them Safe” while attending The March on Washington for Lesbian, Gay and Bi Equal Rights and Liberation in 1993, because she felt that the sign needed to demand action.

The back of the sign reads “Differences Enrich Us All.”

Remembered for her love of social justice

Goldin had a long history of activism, having been introduced to radical politics when she married her husband Morris Goldin at age 20. Among numerous other causes, Goldin became a housing activist when she moved to the Lower East Side in 1945 and was involved in the struggle for affordable housing from then on. 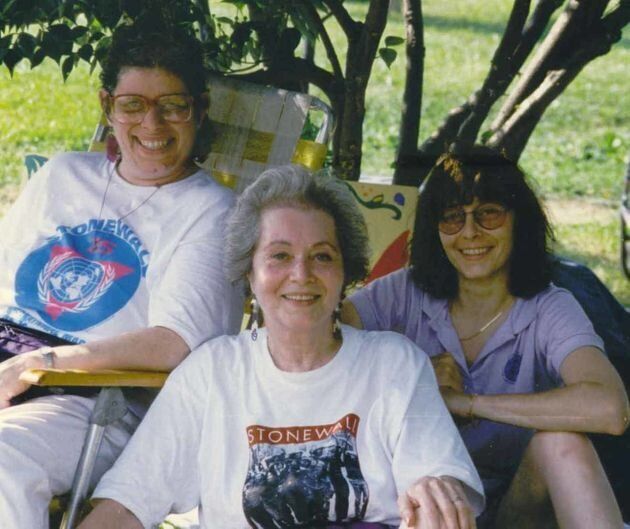 She ran for state Senate in 1953 under the American Labor Party, a socialist ticket, along with Dr. W.E.B. Du Bois. She was also involved in civil rights protests and the movement against the war in Vietnam. “My vision is to overturn the war machine paradigm/regime and live in a world where everyone has enough food, shelter, and money to live a productive and fulfilled life,” Goldin said.

In the course of her activism, she remained a highly visible champion for the rights of queer people like her daughters.

“My life has been enriched by personally getting to know and being part of the LGBT community. Because of this, I have made many new and dear friends, and expanded my political activism.”

She spoke out in 2014 against police brutality against Black men.

“If they [police] were punished, maybe they’d think twice about using young Black men as target practice,” she said in a clip posted on Instagram, in which she was holding another iconic sign: “Disarm racist cops!”

Goldin and her sign have been fondly remembered by friends and loved ones, including former neighbour and Washington Post writer Steven Zeitchik. In a touching Twitter thread, he linked her passion for change with that of local Black Lives Matter protesters.

In the past few years she was ailing but you’d still see her out there w/her walker & aide--pushing, battling, not surrendering. And petting dogs & greeting kids. That was the thing about Fran–for all her salt & vinegar, she was warm, loving, joyous. Angry only when it mattered.

Fran finally gave up the ghost days ago. She died right here, in hospice, in her apartment. For years she would say "I'm going to die in this apartment!" She didn’t mean it as a lament – she meant it as an aspiration. And she fulfilled it.

I can't help feeling like the timing wasn't an accident. It was as if she knew that tens of thousands of people were about to take to the streets—just a few blocks away in Union Square--to fight for what they believed in, and said, "It's OK, the kids are all right, I can go now.”

While Goldin’s sign may be laid to rest, her long-held values of inclusion and acceptance remain just as necessary and worth taking up by any LGBTQ+ ally.

With files from Al Donato