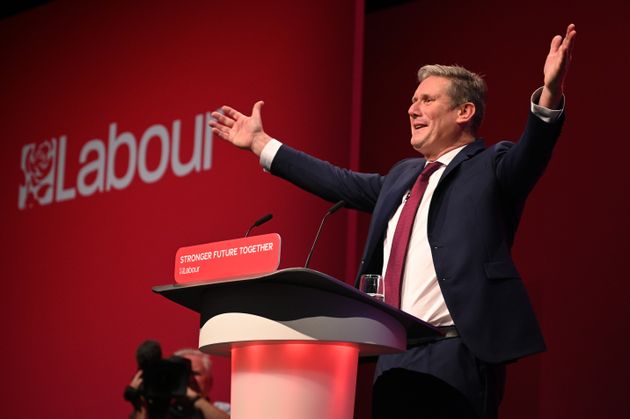 1. Locking out the Left

Keir Starmer will leave Brighton happy with at least one thing - despite the noise he took on the Jeremy Corbyn-era left and won. For now.

The conference began with a fight over the rules of the next leadership election, saw the resignation of the last remaining Corbynite in the shadow cabinet and Starmer’s speech was heckled from the floor.

Labour members voted narrowly in favour of changing the leadership contest rules so that in future, candidates will need the support of 20% of Labour MPs - up from the previous 10% - to stand. Moderates saw this as key to locking the Corbynite left out of the leadership for the foreseeable future, as MPs are seen as far more centrist than the membership. Perhaps even more important for Starmer allies was a change making it more difficult for local party members to deselect their MP as the candidate - ensuring the Parliamentary Labour Party remains more moderate.

Andy McDonald’s resignation as shadow employment rights secretary on Monday afternoon, over Starmer’s refusal to back a £15 minimum wage policy, was described as an attempted “sabotage”. But as an isolated resignation rather than the start of a wave it will unlikely live long in the memory.

The spattering of loud heckles, “where’s Peter Mandelson”, during Starmer’s speech, the most important of his career so far, was a reminder that while the left might be out of power it is not out of voice. A couple of prepared responses enabled Starmer to demonstrate he was prepared to take-on the section of the party he believes voters dislike at best and are scared of at worst.

2. The battle-lines of the next election

As well as moving to the centre on many policy issues and keeping up the attack on Boris Johnson as lacking competence, Labour senses an opportunity on the economy.

The most potent attack the Conservatives usually make on Labour, is that the party will raise taxes. But Boris Johnson’s decision to hike taxes to pay for health and social care may very well have robbed the prime minister of that weapon. Instead, some Labour figures see the dividing-line as the fairness of the tax system not the level of taxation - territory the party feels is much easier for it to win on.

3. Culture wars are not going away

David Lammy, the shadow justice secretary, told the fringes of the conference that the party had to focus on the “meat and butter” issues that all voters care about, crime, healthcare, education and the economy if it wanted to win - not wedge cultural issues.

But the increasingly toxic debate over trans rights was simmering away during the course of the conference. As much as the party might want to avoid being drawn into any attempt by Johnson to stoke a culture war in the country, there is one happening within Labour. And the prime minister has demonstrated he is more than prepared to stoke it.

4. Starmer’s successors are already on manoeuvres

Starmer told Labour members he was “serious” about winning the next election, which many believe could be held in 2023. But it is a huge mountain to climb. And as usual, conference was a notable parade of potential successors.

Angela Rayner’s attack on Boris Johnson and Tory MPs as “scum” may not have gone down too well with Starmer, “I don’t think Boris Johnson is a bad man. I think he is a trivial man”, he said during his speech in a pointed reference to his deputy’s remarks, but it will have endeared her to the section of membership that does see the prime minister as deliberately divisive.

Andy Burnham has repeatedly made no secret of the fact he still has a desire to be party leader one day - having run two times previously. The mayor of Greater Manchester was seen everywhere in Brighton and opened his week with a criticism of Starmer for the “regrettable” decision not to give him, or other Labour mayors, their own speeches in the conference hall. Burnham can also try and stay in the limelight next week when the Conservative Party holds its own conference in Manchester.

Sadiq Khan was perhaps a more low-key presence, but he used his time to remind party members that he is the first ever twice-elected Labour mayor of the capital. And in a bit of a spat with Burnham he told conference he wanted to “remind” his Labour “friends from the North” that “London-bashing” was not a “sensible” strategy.