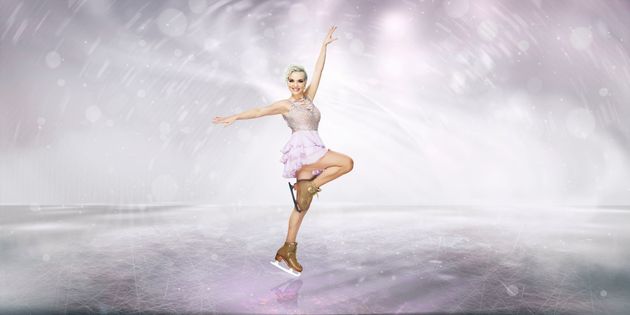 The US skater was brought in as a reserve during the ITV show’s infamous 13th series, during which a number of participants were forced to drop out early due to injuries and the Covid pandemic.

In 2022, she was brought back to the professional line-up, where she and celebrity partner Regan Gascogine ended up being voted the public’s favourite couple.

“It was just a dream come true,” she says of her win. “Regan was an angel, and worked so hard. I was so proud of everything that he was able to accomplish… it’s really special.

Before becoming involved in Dancing On Ice, Karina was best known in the skating world for competing with her skating partner Joe Johnson, who joined the ITV show the same year as her. 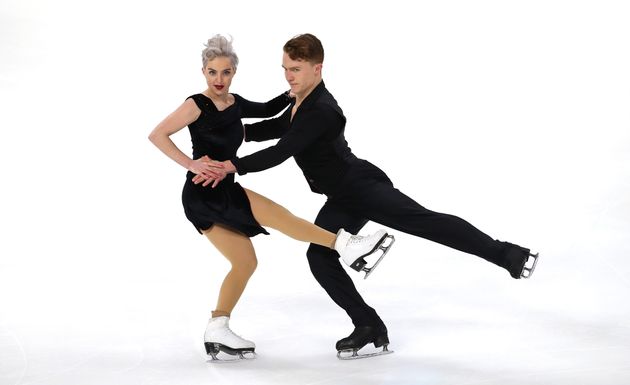 Karina and Joe performing in 2019

The two are the first US skating team to be made up of two performers who are openly LGBTQ (“as far as we know,” she adds with a laugh), which she says sets them apart, but also comes with its own risks within the sport.

She explains: “We were welcomed by a lot of people and I don’t want to diminish that, but particularly in ice dance, there is a lot of pressure to sort of appear as a romantic couple. Or to portray a sort of heterosexual narrative on the ice. So in that way… I don’t know if risky is the right word, but it challenged a lot of, I think, [ideas] in ice dance.

“There’s a lot of pressure just to portray very specific gender roles. And I think any sort of queerness challenges that in the sport as well.”

However, she adds, “being out brings a new creative lens to the sport, which I think is really cool”.

“I love seeing new things on the ice, one of my favourite things to watch is when you see something brand new,” Karina says. “So it’s really exciting in that aspect.

“And also just for kids in the sport who didn’t have – because I definitely didn’t know a single queer woman in skating when I was growing up, and that was tough.”

To mark Pride month, we spoke to Karina about the queer performers changing the world of ice skating, the modern-day queer icon she’s “obsessed” with and the importance of finding joy despite the obstacles faced by the LGBTQ+ community…

Who was the first queer person you can remember looking up to?

This is a little cheesy, but can I say Joe [Johnson, her skating partner and fellow Dancing On Ice pro]. Because Joe was out before I was, and obviously he’s my best friend. I think it was so tremendously important for me to have someone close to me, who I was able to talk to about everything. He helped me a lot.

There were so many things – the first time I went to a gay club was for his birthday, and he was one of the only people I was out to. Just different things like that where he kind of guided me into these spaces and took me to shows with gay people in them. It was nice to have somebody to hold my hand through the process. 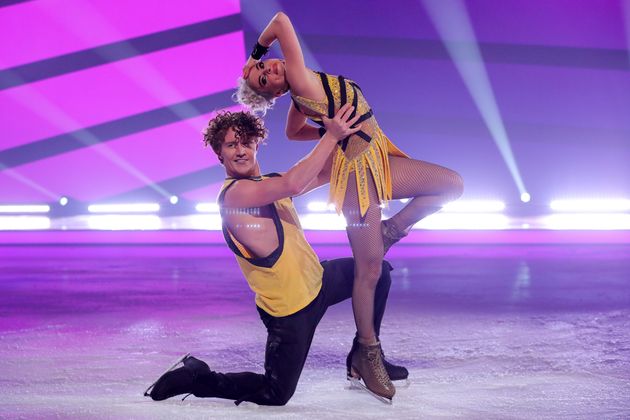 Joe and Karina performing their first Dancing On Ice routine together in 2021What was the first LGBTQ+ TV show or film that you remember resonating with you?

I am a huge nerd, but I did watch The Legend Of Korra – this was before I was out. And I just wept when it was over, which was probably a sign for me to come out, at least to myself. I had a friend who was like, “Karina you’re going to love this show”, I think maybe she was trying to tell me something.

Basically, it’s an animated show and the main character is bisexual, and has a relationship with a male friend for a while. And then at the very end she ends up with a female friend that she’s very close with. I actually don’t think I’d ever seen a main character in a show who was bi until that point. 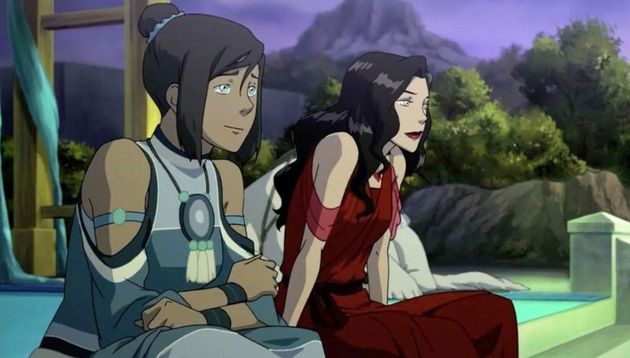 The Legend Of KorraWhat’s a song you associate with your own coming out?

When I was first coming out, Hayley Kiyoko’s Girls Like Girls was definitely like my anthem. It’s just so fun, and the music video is perfect. Hayley knows how to make a music video, for sure. I listened to a lot of Tegan + Sara too during those years. They were among the only [queer] artists that I really knew of at the time, so they’re both pretty important to me. They’re legends.

What was the most recent LGBTQ+ show or film that made an impact on you?

I just watched Hearstopper, and I was just an emotional wreck about it. I’m a sucker for a queer young adult narrative, and Heartstopper just did such a good job. It was so compassionate and sweet. While I was watching, I just kept thinking, “wow, I’m so glad kids have this”.

I’m going to say Torrey Peters, who wrote Detransition, Baby. I’m obsessed with her, I thought her book was fantastic. So fun and funny and compassionate, and obviously very queer. It’s so good, I was blown away.

Who is a queer person in the public eye right now that makes you excited about the future?

I’m going to say Amber Glenn, who is a skater in the US. She came out a couple of years ago, and she’s just really unapologetically herself. She makes me really excited about the future of skating, I’m really excited about her presence. In her skating she doesn’t necessarily try to fit into this sort of heteronormative, rigid idea of what a women’s figure skater should be. And I think that’s cool.

She really celebrates her place in the queer community, and every time she skates, there are always Pride flags and bi flags in the stands, which makes me emotional. I love watching her. 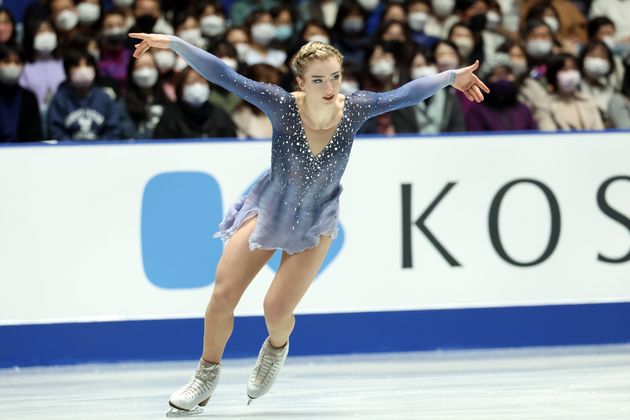 I didn’t grow up with queer community, I didn’t know queer people growing up, and every time I’m at Pride and I’m surrounded by people like me, it’s almost a shock to me – even still, being surrounded by community, it takes my breath away. It’s healing. 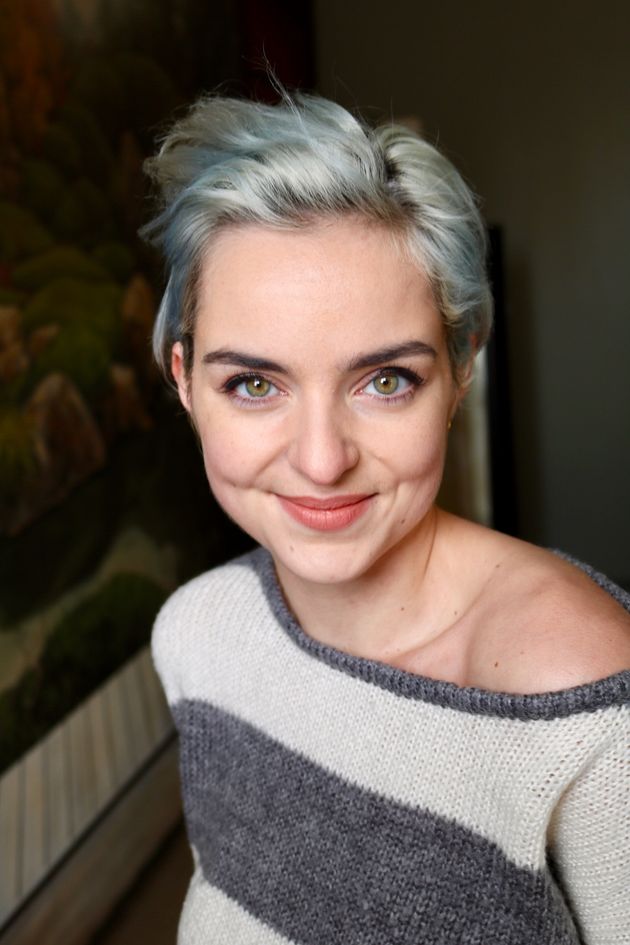 It’s so hard, because right now in the US we’re seeing some regression in terms of where we’re at politically, so it can be a bit discouraging when you think about the next generation.

I would [tell young queer people] to try and always make it a priority to stay hopeful, because I think hope is how you keep going. And it’s the way forward. And it’s how you bring other people forward along with you.

So whatever you can do to maintain that hope, that’s going to be your biggest asset. And just remember that there is community, even if it’s not around you immediately, there is a community out there and you will find it eventually.

Karina Manta’s memoir On Top Of Glass is out now. 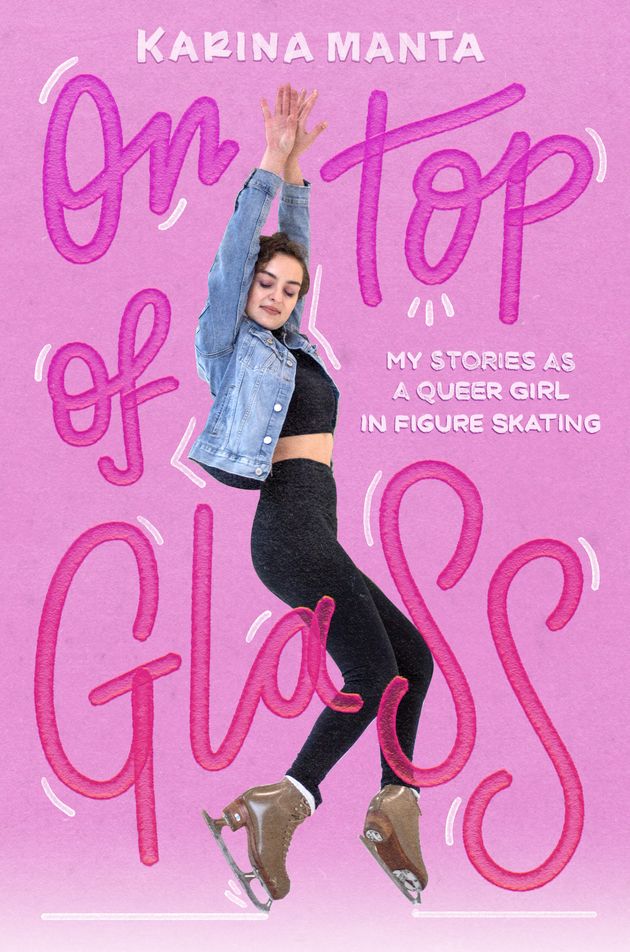 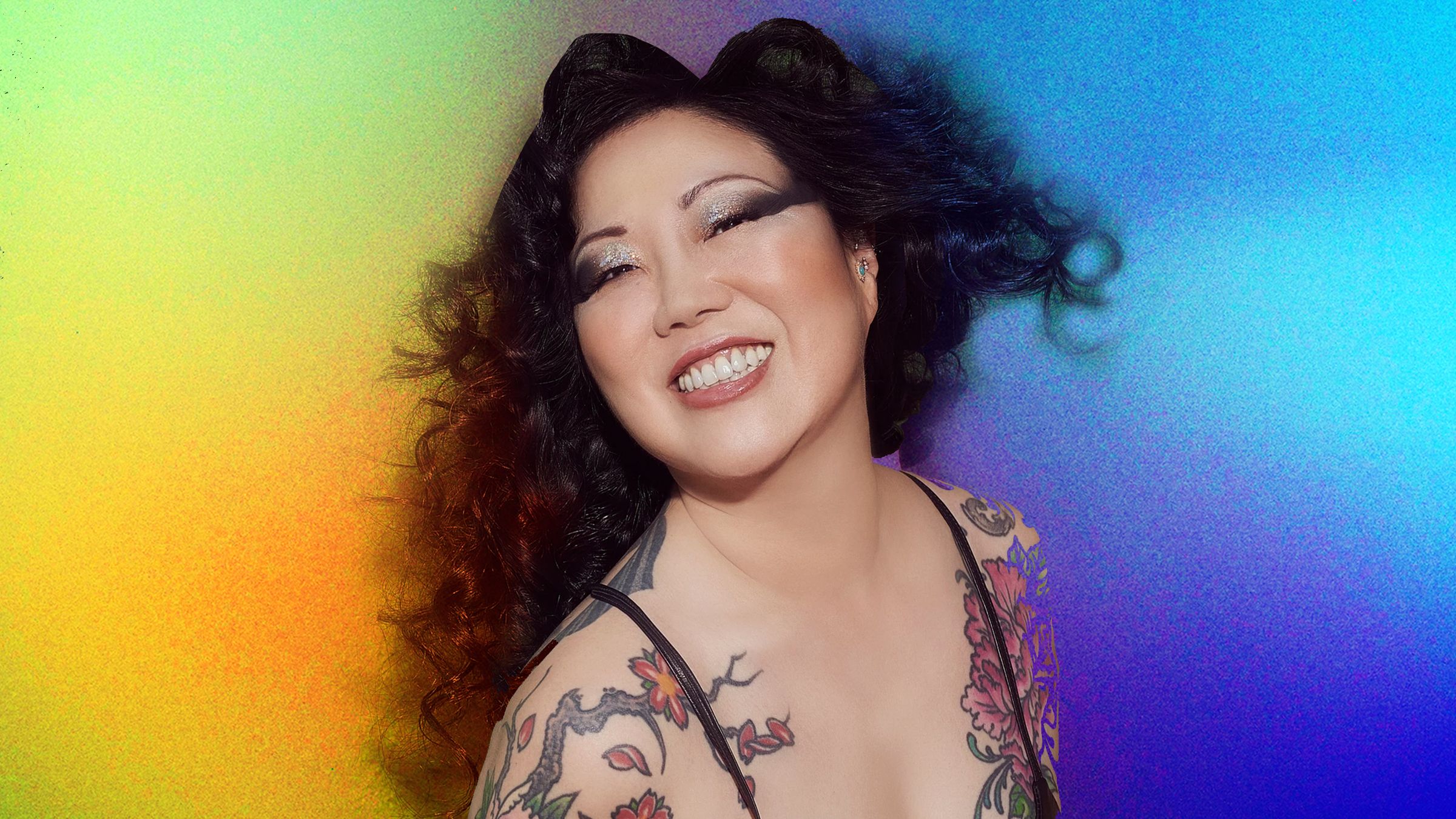 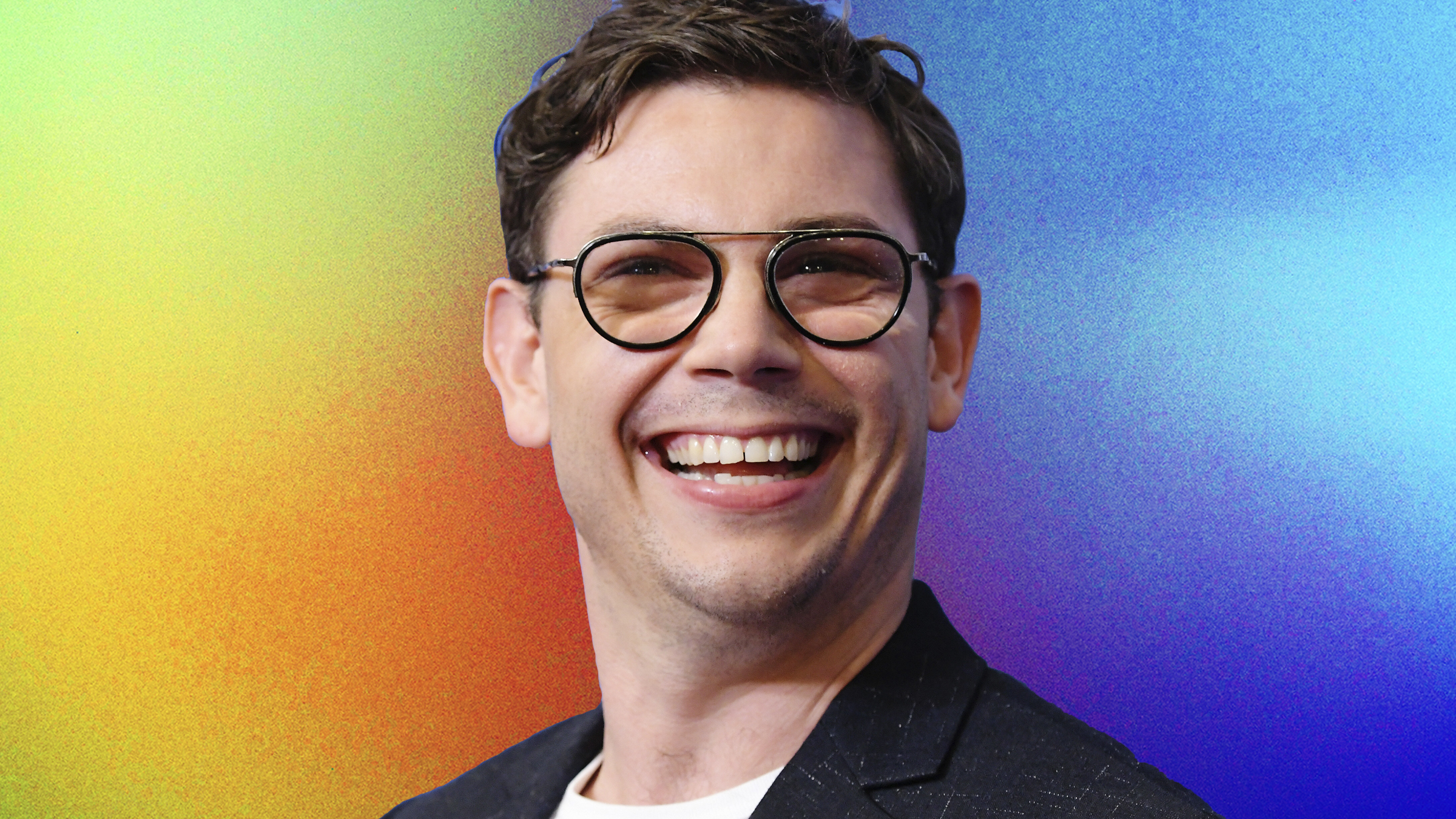 Ryan O'Connell: 'It's A Scary Time, But More People Are With Us Than Against Us' 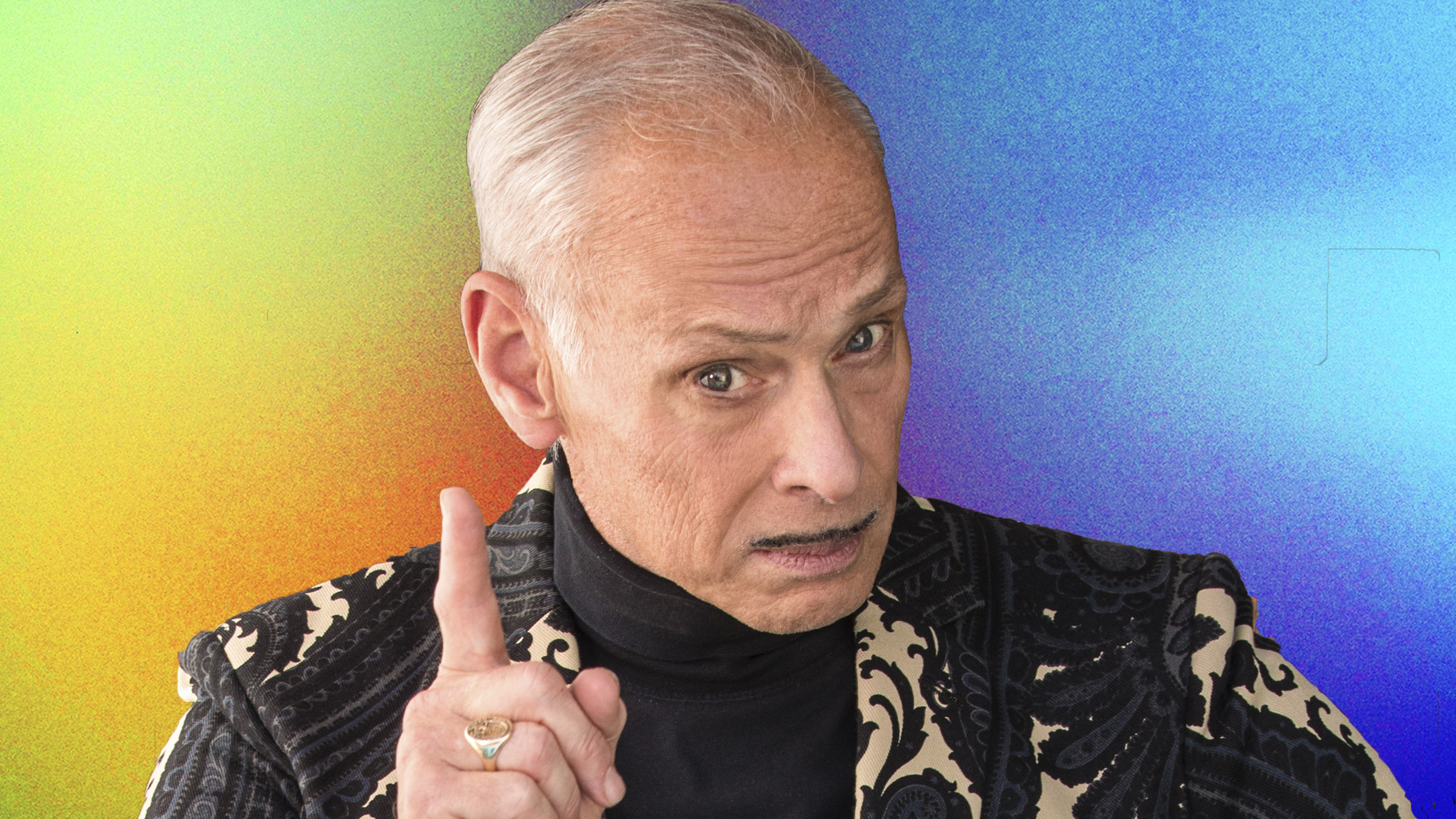 John Waters: ‘It’s Easy To Be Offensive, It’s Much Harder To Be Surprising’