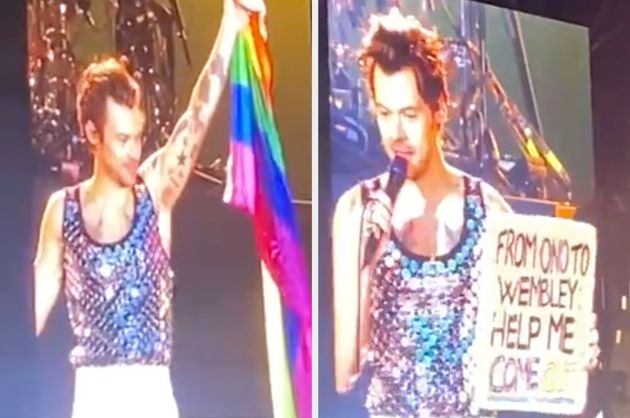 Harry Styles had a heartfelt encounter with one of his fans during a show at Wembley Stadium at the weekend, who he helped come out.

The chart-topping star performed his first ever solo shows at the iconic venue on Saturday and Sunday nights, taking a break from singing when a sign with the message “From Ono To Wembley: Help Me Come Out” caught his attention.

“So you’d like the people of Wembley to bring you out?” he asked the fan in question, to rapturous applause from the packed-out crowd.

Urging the audience to “make some noise”, Harry took a Pride flag from the front of the stage and said: “When this flag goes above my head, you are officially out.”

“I think that’s how it works,” he joked. “When this flag goes over the head, you’re officially gay, my boy.”

harry styles helping a fan come out tonight at wembley