Pride Can’t Go Back to What It Was Before

It might have been the sight of a muscled roller skater in a lacy tutu, or of a thong-clad twerker commanding an on-the-move cheering circle, or of a giant paper-mache puppet of Janelle Monáe that made the epiphany hit. It could have been the sign that said “‘Productive’ Sex Sucks!,” or the chant about bottoms and tops both hating cops, or the beautiful graffiti-style poster of Tony McDade, a black trans man recently shot and killed by a police officer in Tallahassee. Maybe it was seeing neoprene fetish headgear doing the same anti-viral protective work as surgical masks and bandanas.

But at a certain point during the Queer Liberation March in New York City on Sunday, 50 years after the first annual celebration of the Stonewall uprising, the feeling became overwhelming: Pride should always be like this.

What Pride was before, and what it tried to be this year via webcasts, does of course encompass political demonstration and aesthetic fabulosity. But in a regular year, the summer LGBTQIA+ fests in cities worldwide—and in New York City especially—are parades, not protests. Subcultures and service organizations segment themselves between or on top of motorized floats. There’s some sense of competition as to who can inculcate the loudest cheers and the most glitter rain from spectators. That the event celebrates acceptance more than resistance is made plain by the police who join the parade as well as the corporations. Drag queens smile from pharma-sponsored thrones. Viewers cool themselves off with bank-branded fans. 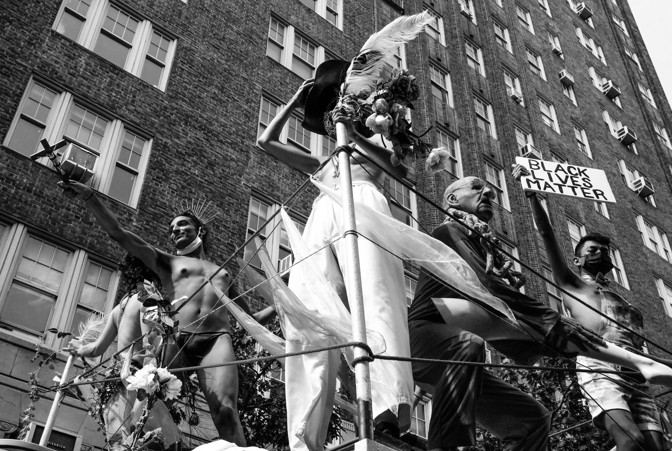 In recent years, maybe since the nationwide legalization of gay marriage in 2015, triumphalism has outshone much sense of political urgency. (Clay Benskins)

The big spectacle of Pride—the parade, the parties, and the other affiliated events—is always inspiring because the right to public pleasure is so hard-fought for queer people. But in recent years, maybe since the nationwide legalization of gay marriage in 2015, triumphalism has outshone much sense of political urgency. Alternative events, eschewing the support of corporations and law enforcement, have sprung up, emphasizing the movement’s unfinished work—work that largely involves protecting queer people who aren’t white and wealthy. In some cases activists have openly clashed with mainstream Pride, like when protesters blocked the path of Washington, D.C.’s 2017 parade and forced it to be rerouted. In other cases, they’ve simply thrown their own anti-assimilationist march.

This year, the establishment festivities went digital due to the coronavirus pandemic. So the Queer Liberation March was the only major real-life outpouring for Stonewall’s anniversary in New York City, and it built explicitly off the Black Lives Matter protests of the past month. The march, in fact, began a block away from the park across from City Hall where those activists have set up a camp. On Sunday, that camp—decked in colorful umbrellas, signs, and graffiti—felt like a replacement for typical Pride street fairs. Makeshift booths offered hot food, radical literature, and sunblock, all for free. The fences were posted with information about the accessibility of nearby bathrooms, phone numbers to lobby lawmakers regarding the death of Breonna Taylor, and a picture of RuPaul next to the words, “Police Brutality, Sashay Away.” 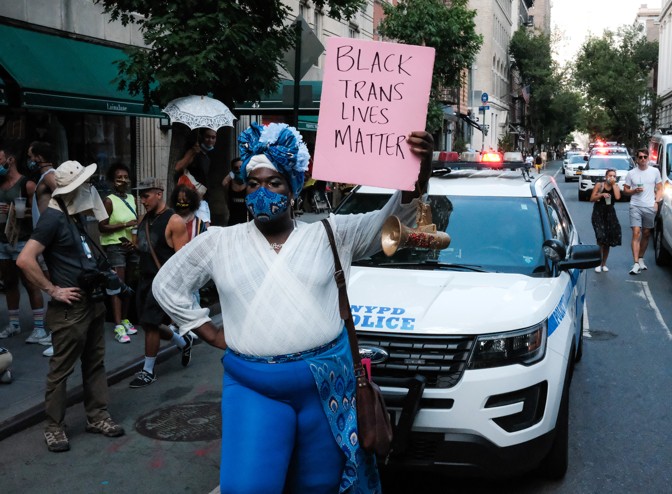 At the march itself, many chants and slogans were familiar from other demonstrations after George Floyd’s killing. But visually it read as a gay fashion party at which it was each person’s duty to stand out. Protesters flaunted bright pink handbags, billowing floral blouses, black leather-ish hoods, kilts, and stilts. There were bare bodies, too—hard and soft, cis and trans. Flesh has always been a key component of the Pride experience; in 1970, at the first Pride in Los Angeles, the Reverend Troy Perry described “a mass of muscle calculated to turn everyone on.” The spectrum of bodies on display Sunday offered a reminder of the purpose of turning people on: to grab attention for one’s message, to preach sex positivity and body acceptance, and, yes, to show pride.

What did the marchers want? Defund the cops rhetoric abounded, as did verbal and visual tributes to black trans people failed by the American justice system. A large effigy memorialized Marsha P. Johnson, the influential veteran of the Stonewall uprising whose 1992 death, activists alleged, was insufficiently investigated by the NYPD. Signs mourned Layleen Polanco, the New York ballroom-scene fixture whose 2019 death at Rikers Island led to the disciplining of 17 correctional officers for misconduct. The focus on black trans people, especially transgender black women, points to a coherent and morally urgent way forward for thequeer movement as a whole. Trans people of color experience disproportionate rates of violence, incarceration, and poverty. Defending their lives involves attacking the various structural bigotries—political, cultural, economic—that also bear down on the rest of the LGBTQ population: racism, sexism, homophobia, transphobia.

The question of how to support black trans people also demonstrates the risks of getting too cozy with corporate America. Pride sponsors such as Verizon, FedEx, and AT&T fly rainbow flags while also donating to conservative politicians who demonize anti-racist activists and work to roll back trans protections. ​​​It’s true that Pride’s business-world backers do contribute materially to the queer movement, including by helping it throw spectacular parades and parties globally every year. But on Sunday it certainly did not feel like anything was lost in the lack of ticky-tack souvenirs with bank logos on them, or block parties where participants pay a cover charge while also being subjected to wall-to-wall vodka ads. Instead, the joy of gathering en masse was bolstered by the energy of having clear purpose. “Pride isn’t cancelled,” read one sign. “It’s refocused.”

Such refocusing of course is not without peril. For some participants, the Queer Liberation March ended with being pepper sprayed or arrested by NYPD officers, who can be seen on video running into crowds that’d been milling about. Crackdowns like these, so characteristic of the past month of protests, evoke what happened in 1969 at Stonewall: a riot against police harassment. The defiance, danger, and burning need behind that historical event has been only a hazy memory at recent Prides, but maybe now that will change. Standing along the protest route, on the edge of the Occupy City Hall camp, I glanced down at one point and saw the Anarchy symbol stenciled on the pavement. Next to it someone had graffitied this: “I think there is hope for us in that an ‘us’ even exists.”