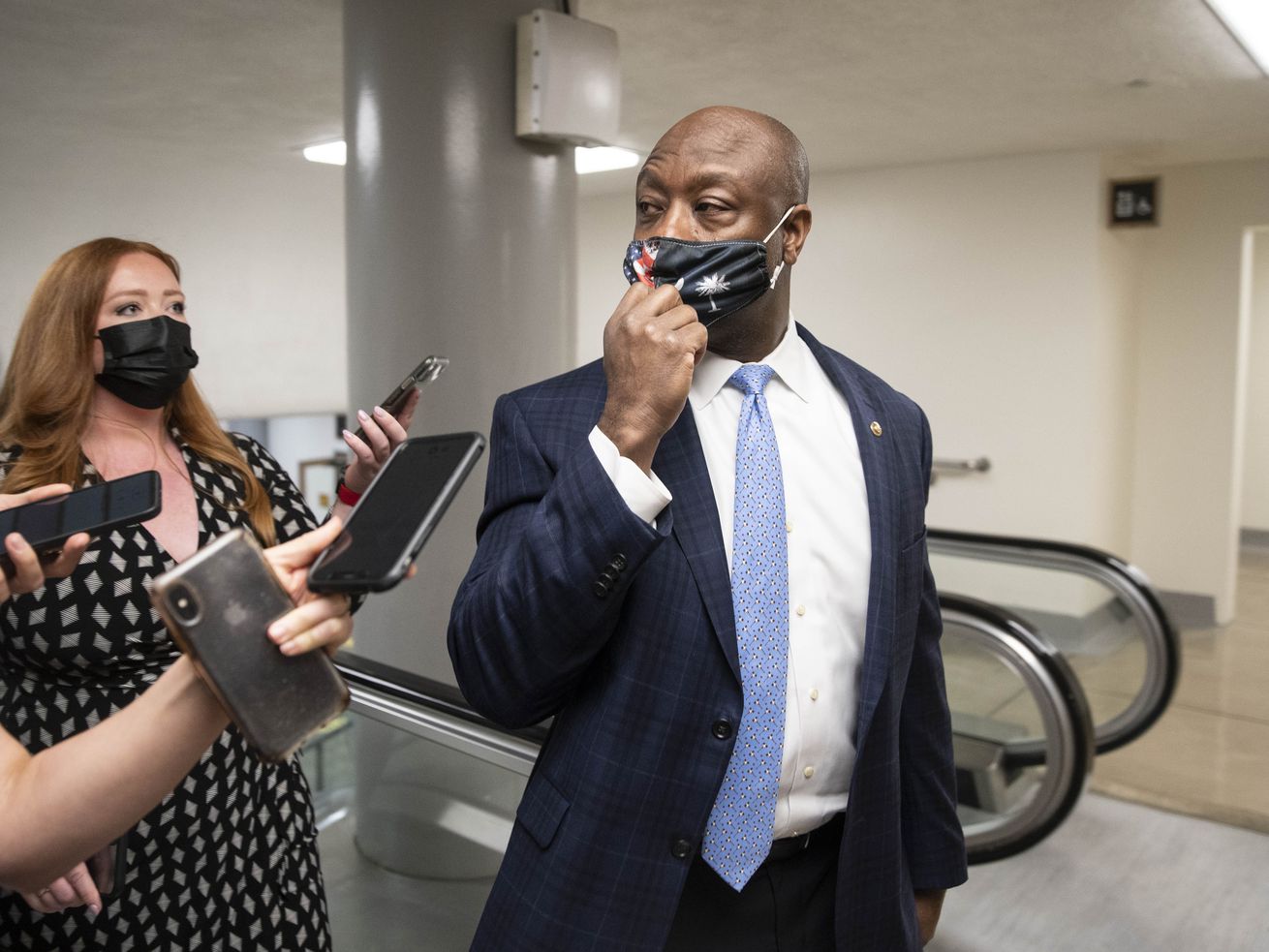 Scott believes his compromise on qualified immunity will get police reform over the Senate finish line.

Last summer, in the wake of protests surrounding the deaths of George Floyd, Breonna Taylor, and others at the hands of police, Sen. Tim Scott (R-SC) said he was pessimistic about the chances of the Senate passing a police reform bill.

Scott, the only Black Republican in the Senate and one of just three Black Republicans in all of Congress, is the lead Republican in the Senate on police reform and was responsible for drafting the Justice Act, the GOP’s police reform bill. The bill failed to get 60 votes, the necessary Senate margin, in 2020, with the majority of Democrats voting against it for inadequately handling the problem. Meanwhile, Democrats’ bill, the more expansive George Floyd Justice in Policing Act, passed the House but was not taken up by the then-Republican Senate.

In February, the House again passed the Democrats’ bill. Now in control of the Senate floor, Democrats could force a vote — but they still need 10 Republican votes to pass the bill, and the legislation, as it stands, received zero Republican votes in the House. This time around, Scott says negotiations to merge the Democrats’ bill with his Justice Act have been productive, leaving him “hopeful” that a deal will emerge.

“This time, my friends on the left aren’t looking for the issue,” Scott said on CBS’s “Face The Nation” Sunday. “They’re looking for a solution. And the things that I offered last year are more popular this year. That gives me reasons to be hopeful.”

Scott noted that the provisions both bills have in common arethe foundation for compromise legislation — federal funding incentives for departments that ban chokeholds, more grants for body cameras, federally criminalizing lynching, and creating a use-of-force database in the Justice Department in order to document and study how police officers use force.

But, as Vox’s Li Zhou explained, the Democrats’ bill goes a lot further. Democrats included a federal ban on chokeholds and no-knock warrants, a national database for police misconduct in order to minimize the transfer of officers with bad records, prohibiting the distribution of some military weaponry to local police departments, and expanding the DOJ’s power to bring charges against departments.

Scott said on “Face the Nation” that some of those differences have already been addressed.

“Through negotiations and conversations, we are now closer on no-knock warrants, and chokeholds, and something called section 1033 that has to do with getting government equipment from the military for local police,” he said. “I think we’re making progress there, too. We have literally been able to bring these two bills very close together.”

The issue of qualified immunity has been a sticking point in negotiations.

Qualified immunity refers to legal protections for police officers that make it difficult to sue them for wrongdoing, and makes civil suits against them likely to fail, as Vox’s Ian Millhiser has detailed.

Last year, Scott called the weakening of qualified immunity a “poison pill,” but this year, he has a new compromise.

Instead of weakening qualified immunity for individual officers, Scott has proposed allowing civil suits to be brought against departments.

Scott added that his proposal went over well with the family members of victims of police brutality he met with last week.

As Vox’s Li Zhou explains, the qualified immunity compromise could have political merit.

Last year, Democrats blocked Scott’s bill from passing — a sign of how limited they considered it — and this year, there will need to be substantial changes to both measures in order for either piece of legislation to get the bipartisan backing it requires to advance.

Scott’s proposal around qualified immunity could be a start to securing that support, though it would require both Democrats and a number of Republicans to get on board to actually be tenable.

Sen. Chris Coons (D-DE), a member of the Judiciary Committee, signaled some openness to it, noting that it was “worth considering, but it’s going to depend on exactly how it’s done.”

“That may be a reasonable idea for compromise,” Sen. Thom Tillis (R-NC) also told Vox, adding that he still needed to study the idea. “That’s an interesting approach. It just shows Tim Scott really does want to make progress on police reform.”

If Democrats decide Scott’s compromise legislation is the most substantial bill they’re going to get, then the problem of acquiring 10 Republican votes still remains. Some Republicans, such as Sen. John Kennedy (R-LA) told Vox’s Li Zhou that qualified immunity reform is a non-starter.

And of course, more progressive Democrats might be opposed to compromise legislation on grounds of it being inadequate. Rep. Cori Bush (D-MO) told CNN she would vote against Scott’s qualified immunity proposal, saying it was not a provision she would be willing to compromise on.

Still, lead Democratic negotiators, including Rep. Karen Bass (D-CA) in the House, said they are willing to negotiate so long as the qualified immunity provision maintains its purpose — accountability for officers.

Sen. Cory Booker (D-NJ), who is in charge of Democratic police reform talks in the Senate, told reporters he was “really encouraged” by the state of negotiations and that he felt they had momentum. And President Joe Biden put pressure on lawmakers to follow through in his speech Wednesday night, asking senators to reach a compromise by the anniversary of George Floyd’s death, May 25.

On the Republican side, Scott believes that for enough senators in his party, where he leads, they will follow.

“Significant numbers in my party have already said to me, we will go where you go on this issue, as long as I can explain my position,” Scott said Sunday. “And we’re going to do that.”