USPS delays are affecting the businesses that need it most 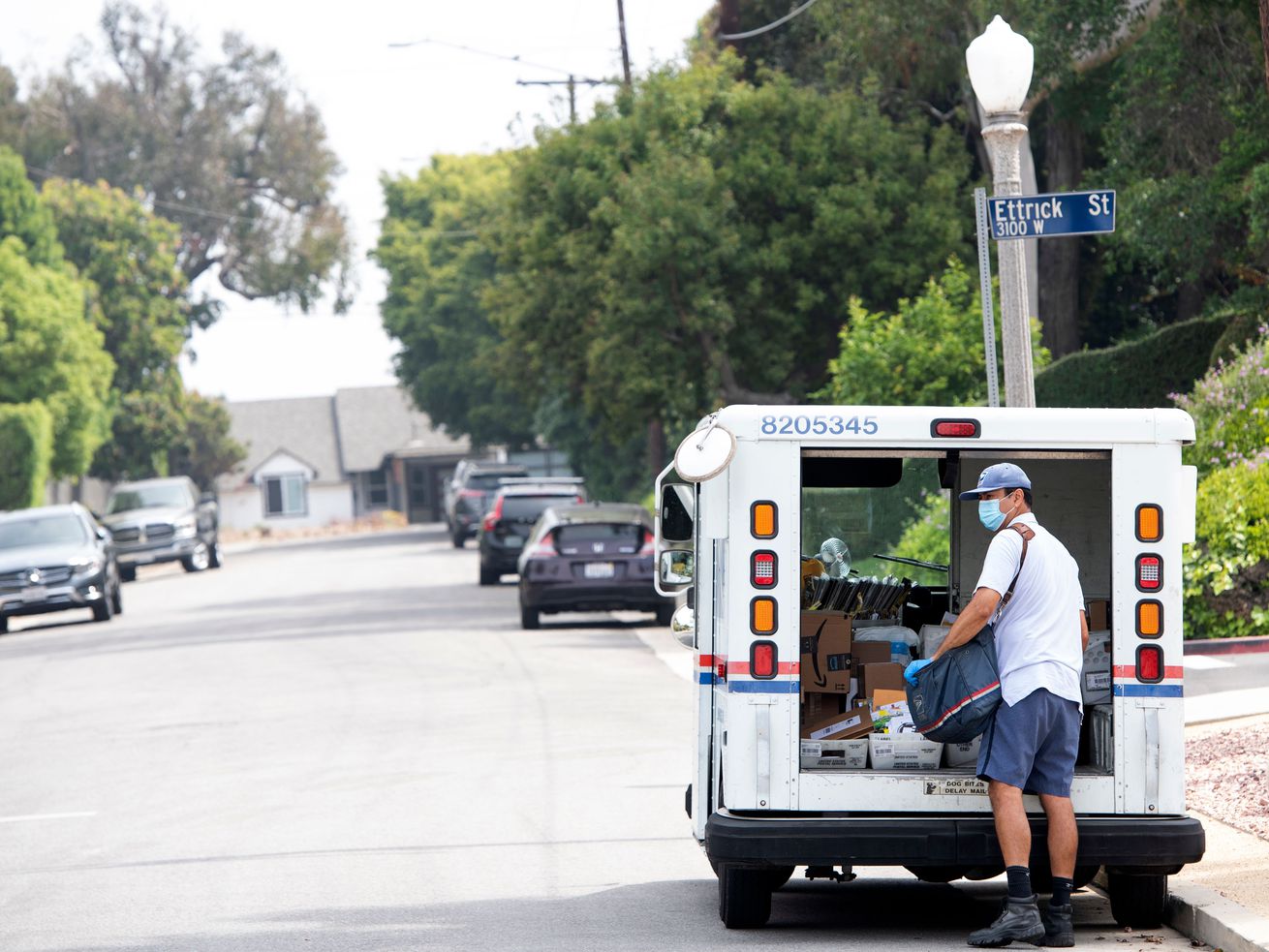 From boutiques to Etsy sellers, small businesses are bearing the brunt of changes to the United States Postal Service.

Sofi Madison’s Boston gift shop Olives & Grace has been struggling for the past few months. First came the pandemic, then constant shipping issues. “It’s exclusively a small-business business. We only work with emerging makers,” she explained. “We’re able to rely on USPS. That’s how we ship, exclusively.”

For the past several months, Madison’s shipments from vendors, all of which are other small businesses, have started coming in late, affecting the shop’s delicate supply chain. “Part of that is Covid,” she said. “Supplies are delayed.” Luckily, she said, her own shipments to customers haven’t suffered much, a rarity she attributes to her friendship with her local postal worker, Joe. “He’ll come by the shop first thing in the morning and make sure that we get our deliveries,” she said. “And he’ll swing by at the end of his shift to see if we need anything brought to the post office, because I’m seven months pregnant and he doesn’t want me having to go to the Postal Service to drop those off.”

I know you know, but my man Joe.. We’re in a two person support group, where every day he tells me why I’m lucky, and every day I toss one back to him. We’re either spiritually evolving or we’re completely delirious. Either way, we’re 6ft apart together, and thank goodness for that. @usps.official

But Madison is bracing for delays, especially heading into the holiday season. For months, the US Postal Service has had a backlog of packages and other mail due to a combination of the coronavirus pandemic and recent cost-cutting measures implemented by Postmaster General Louis DeJoy. DeJoy, a Republican donor and ally of President Donald Trump, was appointed in May and has drastically changed the Postal Service in just a few months. He has cut overtime for postal workers, reduced the number of mail trucks, and taken sorting machines out of post offices, as reported by Recode. In August, DeJoy announced he’d put some of these new policies on hold until November after critics said they would likely affect the 2020 presidential election, a type of meddling some worried was intentional.

For thousands of small-business owners across the country who rely on the Postal Service — many of whom had to pivot almost entirely to e-commerce in the wake of the pandemic — the damage has already been done. An internal USPS document obtained by Supply Chain Dive shows the extent of the delays, which postal workers say are ongoing. The document says that workers may “temporarily … see mail left behind or mail on the workroom floor or docks” at the end of a shift, a departure from the standard practice of getting everything out as soon as possible. Some postal workers told the website that Amazon packages are being prioritized, putting small businesses at yet another disadvantage.

“It’s impacting reviews — [small businesses] are getting negative reviews because things are taking a really long time to arrive,” Molly Day, the vice president of public affairs for the National Small Business Association (NSBA), told The Goods. “They shipped it as soon as they got the order, and it’s a week, two week, three weeks later that people are getting it.” Consumers have gotten used to Amazon-style near-immediate shipping, something that’s both expensive and logistically difficult for small businesses to accomplish even in the best of times. Now that people feel less comfortable buying things in person, having orders arrive late is particularly devastating.

Day said the NSBA conducted an “informal poll” of its members and found that 60 percent of respondents said they’ve experienced some kind of postal delay. Nearly two-thirds of the businesses polled, 65 percent, said the USPS was their most commonly used form of business shipment. Seventy-five percent of those polled said they primarily rely on the Postal Service for payments and checks, and 7 percent use it for sending and receiving business goods. In other words, USPS delays affect every aspect of a small business, not just the consumer-facing end. In a September 10 press release, USPS noted an “uptick in service performance, consistent with recent trends.”

In a statement to The Goods, a USPS spokesperson acknowledged that there have been issues but reiterated that service is trending upward.

“There have been misconceptions about our operational actions. The Postmaster General has spearheaded two initiatives during his tenure to drive operational discipline and improve efficiencies that will help improve service and help the Postal Service embark on a path of sustainability,” spokesperson Kimberly Frum said. “These initiatives include plans to ensure trucks run on time and on schedule, and to realign our organizational structure to allow for clearer lines of authority and accountability. As a result of these initiatives, our on-time departures are approaching 98 percent and extra trips are down by over 70 percent.”

Still, business owners say lost packages are another major issue. “We’ve heard stories of people having to replace goods just because they haven’t shown up yet,” Day said.

Chris Doeblin, the president of New York City bookstore Book Culture, said the postal service has lost a handful of orders since March. “The problem with USPS is that the tracking isn’t very effective and there is no resolution to a lost package; we absorb all that risk,” Doeblin told The Goods via email. Before the pandemic, online purchases made up around 3 percent of total sales volume. “At first during the Covid era we were almost 100 percent online sales, and that has trended back to where we are now about 25 percent online sales,” he said.

On Etsy’s forums, sellers who were used to shipping out products to customers across the country before the pandemic commiserate about how the new USPS changes have affected sales and reviews. In one thread, a seller said an order they shipped on July 27 still hadn’t arrived by August 8, a delay of more than a week. “I’m not a huge seller but the amount of lost packages I have right now compared to the amount sold is crazy,” another seller said. Another said they believed the shipping issues were due to USPS cutting overtime for workers. “My carrier works 6 days a week,” one wrote. “He has only been working there about 5 years and 3 years ago they changed his contract to salary. He says that he works 30-40 hours a month unpaid because of this. Imagine the people not on salary.”

Cutting overtime is a major factor in all of this. In July, DeJoy began requiring postal workers to return to their base by a set time even if they hadn’t finished delivering all their mail for the day, which both reduced overtime hours for workers and contributed to the backlog. Instead of taking as much time as was needed to deliver all packages on a route, mail carriers were now being asked to leave unfinished work for the next day, causing a snowball effect. “[I]t’s an indisputable fact mail postal customers have witnessed a degrading and slowing of mail service since Postmaster General Louis DeJoy instituted changes in mid-July,” Mark Dimondstein, the president of the American Postal Workers Union, told CNN in August.

Put simply, DeJoy began limiting mail carriers’ ability to do the kinds of courtesies Sofi Madison, the owner of the Boston gift shop, gets from her local postal worker. Instead of dropping by at the end of a shift to see if she has anything that needs to be delivered, Madison’s mail carrier, under the new rules, would have had to just wait until the next day.

“That kind of love is just, like, a signature of the Postal Service, from my experience and everything that I’ve known,” Madison said of her postal worker’s attentiveness. “Without that kind of human intervention and touch, we would be in a much different position as a small business, financially.”

Help keep Vox free for all

Millions turn to Vox each month to understand what’s happening in the news, from the coronavirus crisis to a racial reckoning to what is, quite possibly, the most consequential presidential election of our lifetimes. Our mission has never been more vital than it is in this moment: to empower you through understanding. But our distinctive brand of explanatory journalism takes resources — particularly during a pandemic and an economic downturn. Even when the economy and the news advertising market recovers, your support will be a critical part of sustaining our resource-intensive work, and helping everyone make sense of an increasingly chaotic world. Contribute today from as little as $3.