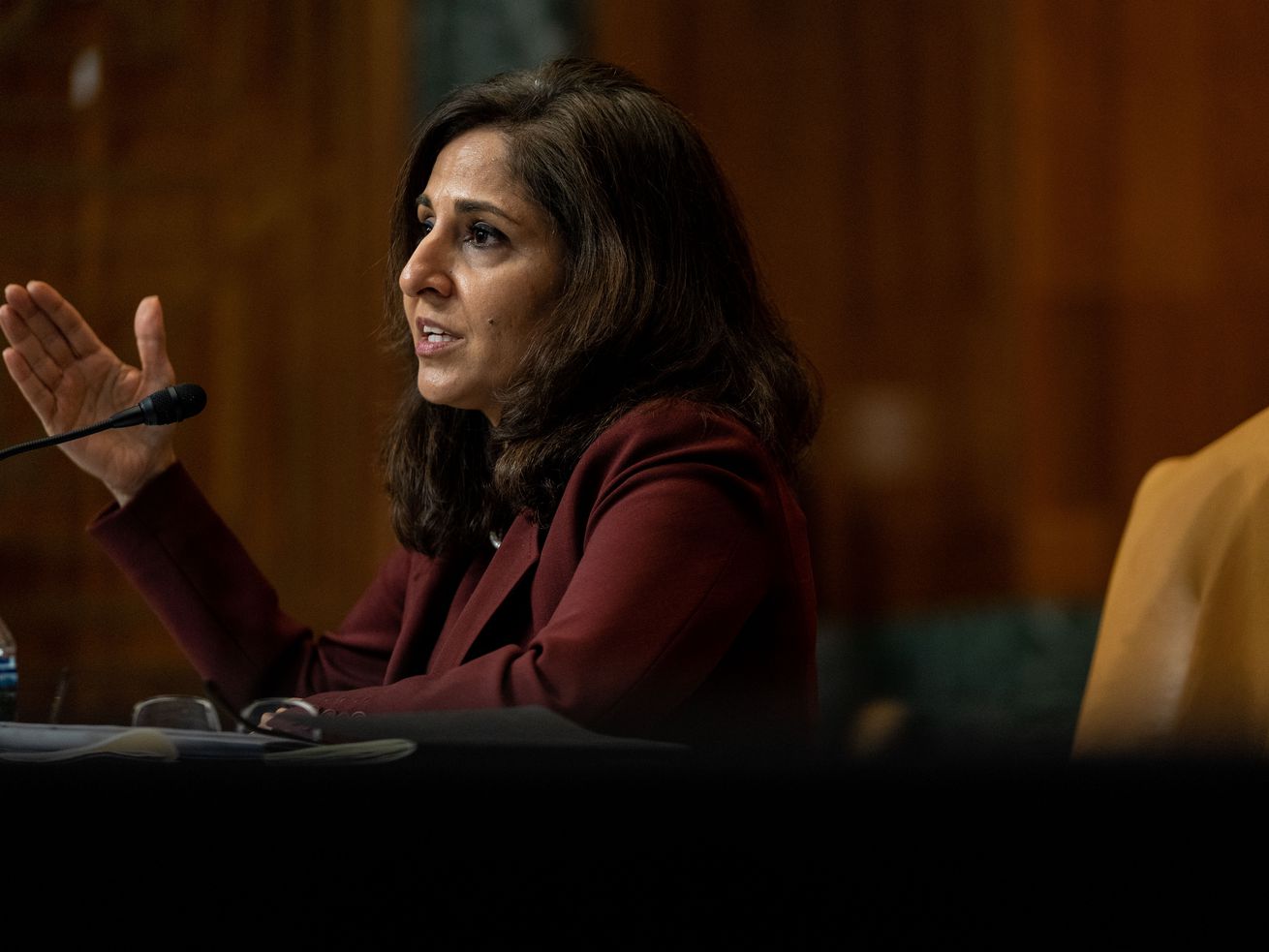 Neera Tanden, nominee for director of the Office of Management and Budget (OMB), testifies at her confirmation hearing before the Senate Budget Committee on February 10, 2021. | Anna Moneymaker/Getty Images

Tanden looks like she’ll be the first cabinet nominee sunk by old tweets.

Tanden is President Joe Biden’s nomination to lead the United States Office of Management and Budget, an office tasked with planning and overseeing the implementation of the federal budget once Congress passes it. Tanden, the president of the left-leaning think tank Center for American Progress, looks to be Biden’s first cabinet pick to not be confirmed by a narrow Democratic-led Senate. Her old tweets are a big part of the reason.

Biden’s administration has emphasized the historic nature of Tanden’s nomination; if confirmed, she’d be the first woman of color and first Asian American woman to lead OMB. She also spent part of her childhood on public assistance, an unusual background for someone in that position. But much of Tanden’s resume is being overshadowed by her online posting — at least 1,000 tweets raking both Republicans and Bernie Sanders-wing Democrats over the coals — that Tanden quietly started deleting in November 2020.

Moderate Republicans and at least one crucial moderate Democrat whose votes Tanden needs to be confirmed aren’t taking kindly to her rhetoric. Sen. Joe Manchin (D-WV), a key Senate swing vote, said on Friday he’d oppose Tanden’s confirmation. Manchin’s statement looked to be the beginning of the end for Tanden, who needs 51 votes to be confirmed in a Senate that’s split 50-50 between Democrats and Republicans.

“I believe her overtly partisan statements will have a toxic and detrimental impact on the important working relationship between members of Congress and the next director of the Office of Management and Budget,” Manchin said. His statement was followed by moderate Republican Sens. Susan Collins (ME) and Mitt Romney (UT) opposing Tanden on Monday.

“Sen. Romney has been critical of extreme rhetoric from prior nominees, and this is consistent with that position,” a Romney spokesperson told Vox. “He believes it’s hard to return to comity and respect with a nominee who has issued a thousand mean tweets.”

So far, the White House is sticking by its nominee, mounting an outreach campaign to senators of both parties to try and get them on board.

“We have been working the phones, in touch with Democrats and Republicans and their offices through the course of the weekend,” White House press secretary Jen Psaki told reporters on Monday, adding that the White House still sees a path for Tanden.

But the extremely tight math here means that unless one Senate Republican decides to vote yes for Tanden, her nomination can’t proceed. And with Collins and Romney already down as noes, it could be especially difficult to persuade fellow moderates like Sen. Lisa Murkowski (R-AK) to buck their party. There’s an obvious irony to Senate Republicans being so up in arms about Tanden’s tweets. After all, many spent the last four years defending an endless barrage of insulting tweets by President Donald Trump.

Tanden’s current dilemma illustrates a lot of the complex dynamics between the progressives and establishment wings in the Democratic party. It also shows the tricky math of an evenly split Senate and the power of individual senators to blow up pieces of Biden’s agenda. Even though Tanden has done plenty to anger the Sanders wing of the Democratic Party, moderates are the ones now poised to sink her.

Ironically, Tanden is largely seen as the OMB pick who would be friendliest to progressive priorities because she doesn’t seem overly concerned with deficit spending. If her nomination goes down, her replacement could wind up being more fiscally hawkish,and likely less historic.

The controversy around Tanden, explained

The controversy Tanden finds herself in underscores some age-old wisdom: Never tweet.

Tanden has been a prolific Twitter poster since the 2016 election. A close ally of Hillary Clinton, she sparred with the Sanders campaign during the 2016 primary and beyond. In a 2018 tweet that is still up, Tanden said, “Russia did a lot more to help Bernie than the DNC’s random internal emails did to help Hillary.” Unlike the friendlier 2020 presidential primary between Sanders and Biden, the 2016 primary left a bitter and longstanding rift between the Sanders and Clinton camps.

In addition to her tweets about Sanders and the left, Tanden has also been unsparing in her criticism of Republicans. She once called Senate Minority Leader Mitch McConnell “Voldemort” and tweeted that Sen. Susan Collins of Maine was “the worst.” Manchin was never personally targeted by Tanden’s tweets, but he is close with Collins.

“I said them, I feel badly about them, I deleted tweets over a long period of time,” Tanden told senators during her confirmation hearing, adding, “I’d say the discourse over the last four years on all sides has been incredibly polarizing.”

“I have to tell you, I’m very disturbed about your personal comments about people,” Kennedy told Tanden. “It wasn’t just about Republicans. And I don’t mind disagreements on policy, I think that’s great; I love the dialectic, but the comments were personal. I mean, you called Sen. Sanders everything but ‘an ignorant slut.’”

“That is not true, senator,” Tanden responded. Even so, she was very apologetic, repeatedly saying she regretted what she had written.

Though Sanders was more polite to Tanden than Kennedy, he also raised not just her personal attacks against him, but also concerns over the millions in corporate donations the Center for American Progress has accepted under her tenure.

“At a time when the wealthy and large corporations have extraordinary influence over the economic and political life of this country, I must tell you that I am concerned about the level of corporate donations that the Center for American Progress has received under your leadership,” Sanders said during the confirmation hearing. (Sanders appears generally supportive of Tanden’s nomination, though he hasn’t yet said exactly how he’ll vote.)

Tanden is certainly not the only one who has tweeted a lot of things they regret. But tweeting mean things about the very people who are tasked with confirming you to a consequential government position doesn’t necessarily set you up for success. In her statement opposing Tanden’s nomination, Collins said her “past actions have demonstrated exactly the kind of animosity that President Biden has pledged to transcend.”

Tanden’s tweets were always expected to be her weak spot in her confirmation hearings in a closely divided Senate. But all it took was one Democrat to sink her, and Republicans are looking unlikely to come to her aid.

What’s next for Tanden in the confirmation process

For now, the Biden administration is pressing forward with Tanden’s confirmation, which will have a committee vote this week.

“The president would not have nominated her if he did not think she would be an excellent OMB director,” Psaki said. “He nominated her because she’s qualified, she’s someone with a proven experience and record of working with different groups and organizations with different political beliefs.”

The director of the Office of Management and Budget has a big hand in elevating certain priorities in the president’s budget and it’s a position that works closely with the White House.Having the head of OMB in place is especially critical to Biden right now; the president and congressional Democrats are currently working to pass a budget reconciliation bill to advance Biden’s $1.9 trillion Covid-19 relief plan through Congress and get it passed. If and when the House and Senate do pass the budget reconciliation bill, it will be up to the federal government — including OMB — to actually implement and execute the budget.

Right now, Senate Democrats and Biden’s White House are trying to lock down any possible Republican votes for Tanden before they weigh whether to pull her nomination. White House officials have pointed to conservative groups like the Chamber of Commerce supporting Tanden, as well as Republican names like former Sen. Jeff Flake and conservative commentator Hugh Hewitt.

“I think it’s too soon to make that decision,” Senate Majority Whip Dick Durbin (D-IL) told reporters on Monday. “However, we need to measure what support she may have among other Republicans.” Durbin added he thought it was likely too late to change Manchin’s mind.

If they can’t, Biden is left with a few tough options. The most likely one is starting the nomination process all over again with a new nominee. Politico’s Tyler Pager recently reported that two contenders include Gene Sperling, a former top economic adviser to former Presidents Barack Obama and Bill Clinton, and former California Gov. Gavin Newsom’s chief of staff Ann O’Leary. Earlier in the year, progressives raised alarm bells that Biden might nominate his now deputy chief of staff Bruce Reed to the position because of Reed’s long record as a deficit hawk.

The less likely possibility is if Biden uses a recess appointment to put Tanden in the OMB position — appointing her when the House and Senate are both in recess. Theoretically, this option could save Biden some time looking for a replacement and allow him to get his first choice at OMB. But it could hit procedural snags in the Senate and anger Manchin and moderate Republicans at the same time. Biden, a Senate institutionalist, may not want to go there.

In the meantime, his and Tanden’s remaining options are looking ever slimmer.