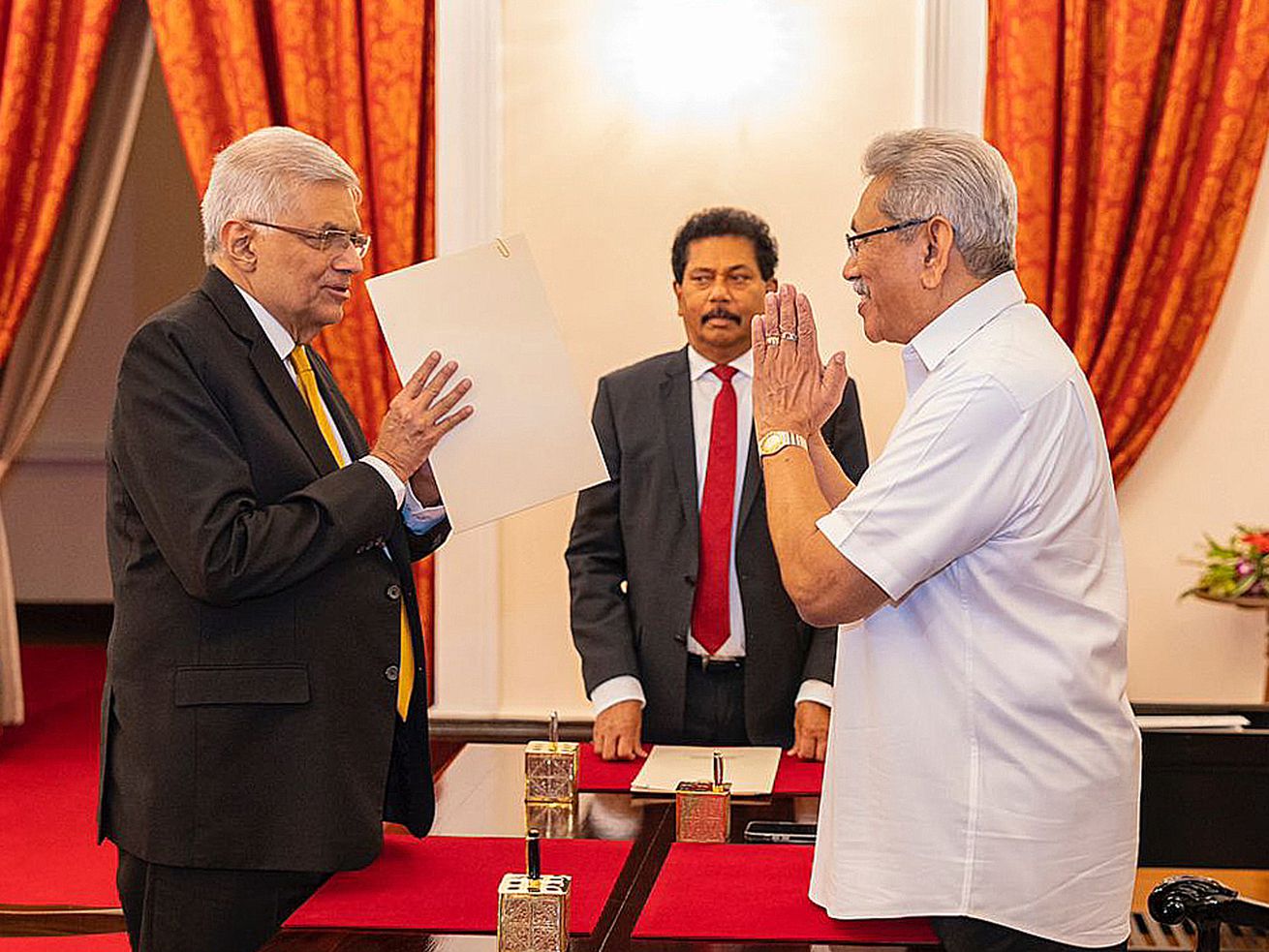 Sri Lanka’s president has appointed a new prime minister, Ranil Wickremesinghe, a familiar face in the role,as the country’s economic crisis balloons into a full-blown political disaster and violent conflagration between security forces, supporters of the current president, and protesters demanding radical political and economic change.

Wickremesinghe returns to office after five previous stints as the country’s prime minister; he’s replacing former Prime Minister Mahinda Rajapaksa, who, along with his brother President Gotabaya Rajapaksa, have overseen the country’s economic collapse. Mahinda resigned last week amid increasingly violent protests, during which nine people were killed and more than three hundred injured, according to Reuters.

As Vox’s Natasha Ishak explained in April, Sri Lanka’s economy is in shambles largely due to the country’s default on about $50 billion worth of foreign loans, for the first time in its history as an independent nation. The past three years have seen successive hits to Sri Lanka’s foreign tourism sector — a series of church bombings in 2019, the Covid-19 pandemic, and Russia’s invasion of Ukraine — which previously brought in about $4.4 billion annually and was a leading economic driver. Those crises, exacerbated by the Rajapaksa’s financial mismanagement, have led to a critical lack of goods including milk, fuel, food, and medicine, and extended power power cuts — leading, in turn, to widespread protests and spiraling into political chaos.

The Rajapaksas are a political dynasty in Sri Lanka, and their reach in the government has been significant; in addition to Mahinda and Gotabaya, their brother served until April 4 as the finance minister. Gotabaya, the president, fired his younger brother, Basil,and replaced other cabinet officials at the time, but protesters and politicians alike weren’t impressed; Udaya Gammanpila, head of the Pivithuru Hela Urumaya party, wrote on Twitter that the switch-up was reminiscent of “old wine in a new bottle,” according to Reuters.

“Sri Lanka’s economic disaster has deep roots: the country has long lived beyond its means — borrowing too much and taxing too little — and produced below its potential. But the Rajapaksa administration’s gross negligence on economic matters since it came to power in November 2019 has significantly aggravated the island’s chronic problems.”

However, the dynasty has been a big part of the problem since Mahinda was first elected president in 2005, as a 2018 piece from the New York Times describes. Over the past decade, the country took out a number of loans, including about $5 billion from China. Through its so-calledBelt and Road initiative, China has invested in a number of infrastructure projects in more than 100 countries around the world; ostensibly, such projects would both create jobs and in Sri Lanka’s case, provide a port on a bustling trade route. However, as Ishak pointed out in her piece, the Hambantota port project was eventually turned over to China as collateral when the Sri Lankan government was unable to pay back or renegotiate the loans — or successfully complete the project, due, at least in part, to rampant corruption.

What has resulted, Keenan writes, is “Sri Lanka’s worst economic crisis in nearly 75 years of independence.” The protests, he wrote in April, “have now morphed into a nationwide uprising,” despite the Rajapaksa government’s “reputation for political repression.” Protesters even forced Mahinda to flee his estate, Temple Trees, and tender his resignation on Monday after they attempted to breach the compound.

Who is Ranil Wickremesinghe?

After halfhearted attempts to form a new government in April and amid increasing threats to his rule, Gotabaya appointed Wickremesinghe to take over his brother’s office; he was sworn in on Thursday and first served as prime minister in 1993, under President DB Wijetunga.

Wickremesinghe is the product of families long active in civil service and the political class, stretching back even before independence, as Al Jazeera reports. Trained as a lawyer, Wickremesinghe is now the head of Sri Lanka’s United National Party, and has held several government posts, including deputy foreign minister and minister of industries. In that post, Wickremesinghe brought in foreign investors — perhaps a crucial selling point for his present appointment, as his relationships with India and Western countries could help in negotiating Sri Lanka out of its current economic turmoil.

However, as the BBC points out, Wickremesinghe has never served a complete term as prime minister, and is perceived as being quite close to the Rajapaksa clan despite being in the opposition party — even, some critics say, protecting them when they lost power in 2015. Furthermore, Wickremesinghe was in office during the 2019 Easter bombings — and claimed he was “out of the loop” in regards to warnings about the attacks, which killed at least 250.

How can Sri Lanka get out of this crisis?

In the face of compounded economic crises, violent protests, and entrenched government corruption, the future of the Sri Lankan government is murky at best. As of right now, protesters are demanding that the remaining Rajapaksa family members — including Gotabaya, the president, whose office entrance protesters have been occupying for the past month — be removed from government. Many also see Wickremesinghe’s appointment as a slap in the face and emblematic of Gotabaya’s longstanding refusal to admit to his government’s role in the crisis.

According to Paikiasothy Saravanamuttu, the executive director of the Center for Policy Alternatives, a think tank based in Colombo, Wickremesinghe has a massive task ahead of him if he is to steer the country out of its present crisis.

“Mr. Wickremesinghe has to focus on both the political and economic dimensions of our crisis of governance,” he told Vox via email. “Neglect of the political dimensions will undermine the economic.”

Chief among the issues that Wickremesinghe needs to address is securing assistance from the International Monetary Fund to purchase basic goods, Saravanamuttu said. The IMF can issue Rapid Financing Instruments, or RFI, to countries in need of immediate assistance due to natural disaster or other forces outside of its control, but Sri Lanka’s circumstances don’t fall under the typical remit of an RFI. Finance Minister Ali Sabry, who replaced Basil Rajapaksa, formally requested assistance from the IMF in April, and has been working with the IMF to attempt to broker some sort of agreement; however, as he said in an address to Parliament earlier in May, any agreement will be based on the restructuring of the nation’s debt and would take six months to put in motion.

But the economic and political crises are so deeply intertwined that, Saravanamuttu said, solving one wouldn’t ease the other; both issues have to be addressed for Sri Lanka to recover. “[Wickremesinghe] has to ensure that we get the bridging finance and the agreement with the IMF as well as clip the powers of the executive presidency and set a date for Gotabaya Rajapaksa to resign and for the office of the executive presidency to be abolished,” he said. Wickremesinghe is, according to the Associated Press, meeting with diplomats from Japan, the US, the European Union, Germany, China, and India to float the idea of an aid consortium to help bail the country out quickly, but the political dimensions have yet to be substantially addressed.

As of now, Gotabaya has expressed no intention to resign his post and retains the broad executive powers instituted under his rule in October 2020; this includes the power to make an array of important appointments and to dissolve the parliament any time after the halfway point of its five-year term. Although Gotabaya has floated the idea of curtailing those powers and on Wednesday reiterated his intention to do so in a speech to the nation, that has yet to move forward. As of Saturday, he retains his office and appointed four new cabinet ministers, all belonging to his Sri Lanka Podujana Peramuna party, in a bid for stability until a new cabinet can be formed. A strict nationwide curfew, imposed on Monday, continues, as do orders for security services to shoot on site anyone deemed to be participating in acts of vandalism or arson.

But protesters, both in the streets and online, are still demanding Gotabaya’s resignation, which Saravanamuttu said is crucial for the country’s future.

“The demands of the people are for the president to go and failure to address this will be to the detriment of the country.”