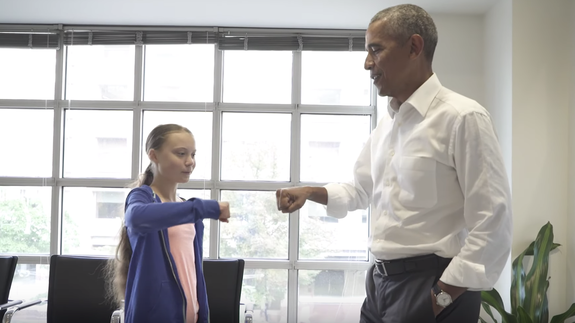 When Barack Obama says you're part of his team, you know you're probably doing something pretty cool.

The word cool doesn't begin to cover the actions of 16-year-old Swedish climate activist Greta Thunberg, who is, in the words of Obama himself, "changing the world."

Thunberg met with the former U.S. president during her visit to Washington D.C. on Tuesday. "You and me, we're a team," Obama said during the meeting. Then the pair enjoyed a pretty epic fist bump. Frankly we'd expect nothing less of both of them.

Thunberg is currently in the U.S. after sailing across the Atlantic Ocean instead of flying. She will speak at Mashable's Social Good Summit in New York on Sept. 22, ahead of the United Nations Climate Action Summit on Sept. 23. Read more...