Did Magic do more to destroy the Lakers before or after he quit? 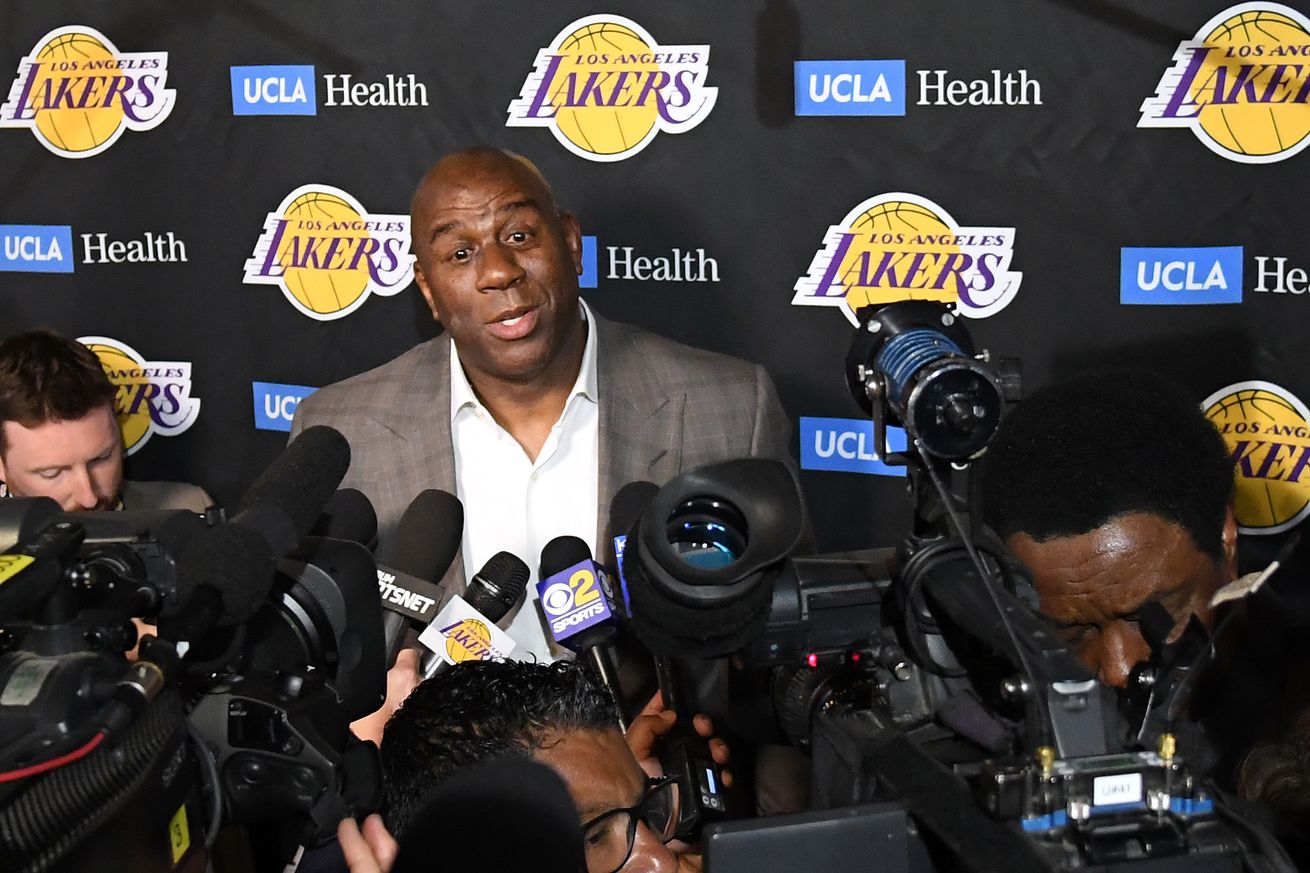 We have that and more in Tuesday’s NBA newsletter.

Good news for Lakers fans who root for the laundry regardless of who wears it: Magic Johnson found a pile of dirty laundry for you, and he’s apparently going to air out all of it. He took time away from his busy schedule tweeting draft ESPN crawl sentences to go on ESPN’s First Take and accuse his successor Rob Pelinka of high treason.

Magic told Stephen A. Smith and, well, the world that he left the Lakers because Pelinka was telling outsiders how little Magic actually worked as the president of basketball operations. Also, Magic bemoaned the fact that being president of basketball operations for the Lakers restricted his ability to go to the movies on Sunday nights. So ... it seems like Sports Chris Traeger had a point.

Magic says Pelinka backstabbed him after they came into power with the Lakers together because Pelinka wanted Magic’s job, even though the legend told Rob that he’d only be around for three years and wanted to groom the junior partner in this exercise for the leader role. That third year would have been this season. It didn’t last. Magic also claims agents warned him about Pelinka when they took over the Lakers together; that just seems mean and par for the course, given that Pelinka was also an agent. It seems like NBA agents fight among each other a lot. One favor Magic may have done the Lakers fandom is expose some serious concerns in how the team is being run now with regards to interference from the business side of the franchise, where Jeanie Buss cut her teeth.

Oh, by the way, the Lakers also introduced new head coach Frank Vogel on Monday. That Magic unloaded on Pelinka hour before that really changed the tenor of questions for Pelinka at Vogel’s press conference! (Pelinka denied it all and seemed legitimately hurt by being humiliated by Magic on live TV.)

The Lakers really are exceptional. How many teams can miss the playoffs yet still take Ls in May? I’m impressed.

Warriors vs. Blazers was a tremendously stupid, funny series. Golden State finished off a sweep on Monday despite trailing by 17 late in the third quarter. Portland actually led by at least 17 in each of the past three games and still got swept, despite the Warriors being without Kevin Durant and DeMarcus Cousins for the entire series and being without Andre Iguodala in Game 4. That’s not encouraging, folks. But hey, Meyers Leonard dropped 30 in the series finale. Small victories. Kudos to a fantastic season for Portland, despite the deflating finish.

The Warriors are so, so good.

Kawhi Leonard carried the Raptors on one leg. It’s doubtful he can keep doing that.

On what to believe about what we saw from Damian Lillard this postseason.

Serge Ibaka is leading the charge inside the Raptors to BELIEVE they can come back, because he’s done it before.

Corbin Smith on how Portland treated the so-called Jail Blazers.

Ooh, Dwight Powell turned down a $10 million player option. All this cap space has dollar signs in players’ eyes ...

The Wizards did not succeed in poaching Tim Connelly from the Nuggets’ front office.

Jonathan Tjarks that the Warriors’ original Big Three still has no rival.

Be excellent to each other.