The most improved position group in each NFL division 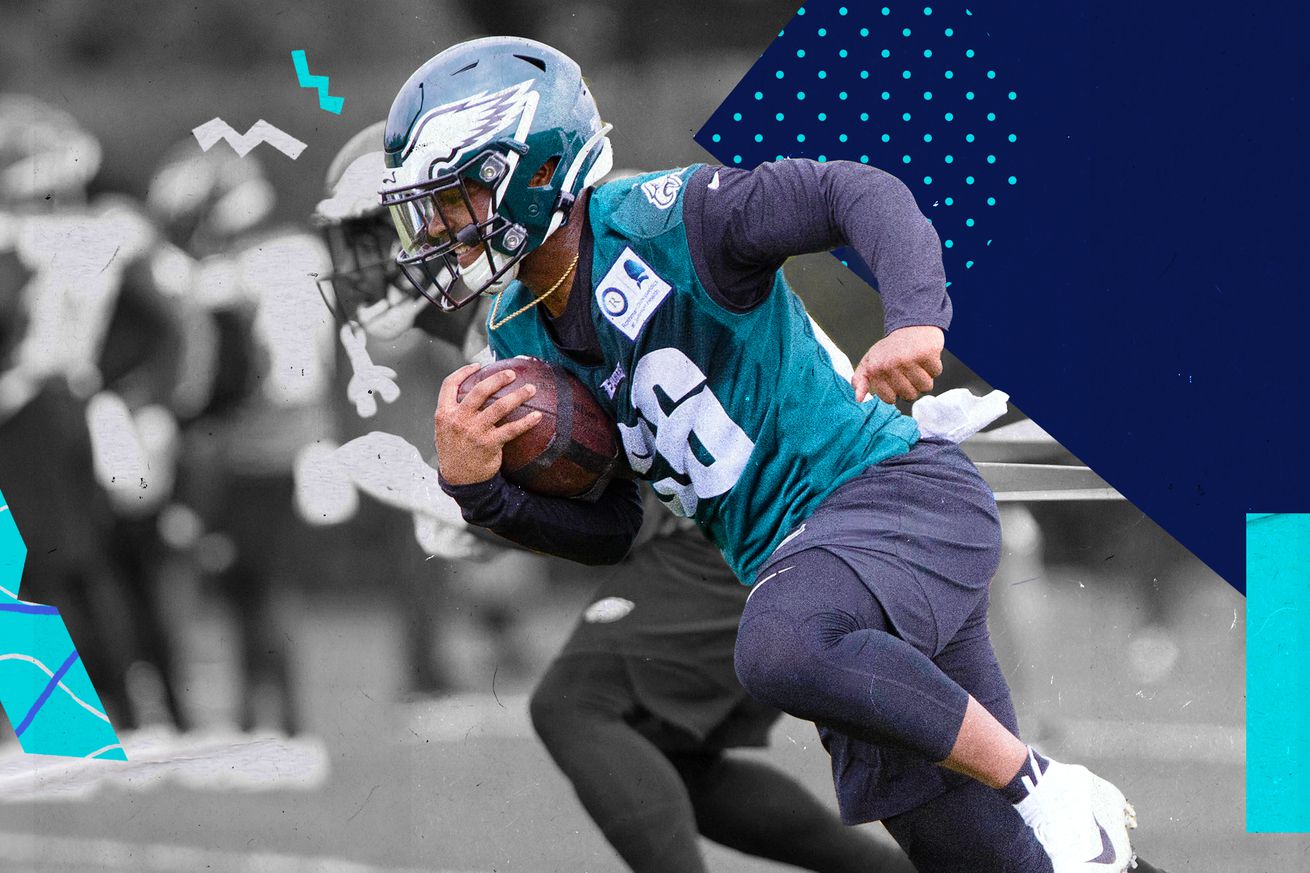 Zeroing in on one position has paid off for teams.

Devoting resources to one position group can pay off in a big way for NFL teams. We got an example of that just last year when the Colts built a formidable offensive line by adding Quenton Nelson and Braden Smith in the draft. The Colts ended up allowing the least amount of sacks in the league and won a playoff game where they thoroughly handled J.J. Watt and Jadeveon Clowney.

The year before, the Jaguars built a championship-caliber secondary by signing A.J. Bouye, Tashaun Gipson, and Barry Church. That passing defense finished first in passer rating, interception percentage, and passing yards per game, and Jacksonville came up just short of a Super Bowl appearance.

Significantly improving a single position group can propel a team into the playoffs. Both the Jaguars and the Colts went from last in their division to contenders the following season.

This year, each division has a team that bolstered one position enough to help them challenge for a playoff spot. Here are the teams that helped themselves the most in the offseason.

The Bills have quietly had a productive offseason designed to get Josh Allen more help. John Brown, Cole Beasley, Frank Gore, and Devin Singletary should inject some life into an offense that only averaged 4.7 yards per play last year.

But the biggest improvement they made was along the offensive line. Buffalo needed to upgrade a unit that finished 21st in sack percentage and 30th in adjusted line yards.

To address the problem, the Bills signed center Mitch Morse and tackle Ty Nsekhe in free agency and took tackle/guard Cody Ford in the second round of the draft. They also had a couple quality depth signings in center Spencer Long and guard Quinton Spain. The first three could immediately slide into the Bills’ starting lineup.

Nsekhe is the most intriguing player they added. He was mainly a backup in Washington, but whenever Trent Williams and Morgan Moses went down with injury, he performed well with little to no dropoff.

It’s unlikely that the Bills will get past the Patriots to win the AFC East, but they’ve brought in just enough pieces to field a competent offense. That, paired with an already good defense, could have Buffalo challenging for a playoff spot late in the season.

Houston was forced to hit the reset button on its secondary this offseason. The team lost Kareem Jackson and Tyrann Mathieu to free agency, released former first-round cornerback Kevin Johnson, and needed to add a player to compete with cornerback Aaron Colvin.

The Roby signing, in particular, has a ton of upside. He looked like he was going to be one of the better corners in the league after playing a pivotal role on the Broncos’ Super Bowl 50 defense, but his play has been a bit inconsistent since then. Roby signed for just one year, so he has motivation to get back on track to cash in next offseason.

The Texans weren’t done there, though. They also drafted Kentucky cornerback Lonnie Johnson in the second round.

In 2019, the Texans play Andrew Luck twice, Matt Ryan, Drew Brees, Philip Rivers, Patrick Mahomes, and Tom Brady. That’s a gauntlet of passing attacks; revamping their secondary was a must to defend their division crown.

Trading for Odell Beckham Jr. was obviously the peak of the Browns’ offseason, but they made other key moves as well — particularly along the defensive line.

Cleveland already had skilled players on the defensive line with Myles Garrett and Larry Ogunjobi. To help take the unit to a new level, general manager John Dorsey went out and acquired Olivier Vernon from the Giants in a trade and then signed Sheldon Richardson at the start of free agency.

Cleveland is breaking in new defensive coordinator Steve Wilks and has a young secondary. An elite defensive line won’t just make for a smoother transition. It’ll also give the Browns a better chance to win their first-ever AFC North title.

After the Raiders traded away Amari Cooper last season, Derek Carr didn’t really have any threats at receiver. That has changed since. In one offseason, Oakland went from having a bottom-tier group of receivers to one of the strongest in the league.

The Raiders’ first move was to trade third- and fifth-round picks to the Steelers for future Hall of Famer Antonio Brown. They gave Brown a new contract, keeping him on the roster for years to come. Then they signed former Chargers receiver Tyrell Williams to a four-year deal in free agency. Williams has been a big-play machine for the Chargers over the last few years — he’s had a reception of at least 80 yards in three of his four seasons in the NFL.

In the draft, Oakland selected Clemson receiver Hunter Renfrow, who should immediately compete for reps out of the slot with J.J. Nelson and Ryan Grant. Renfrow wasn’t the most productive receiver in college, but he always came up big when Clemson needed him, including his game-winning touchdown in the 2017 College Football Playoff National Championship.

Now, Carr has more than enough pieces around him to have a successful season. If he doesn’t perform well, we’ll probably see the Raiders look for a new quarterback as they head to Las Vegas in 2020.

Philadelphia struggled to find a groove at running back last year. The team never figured out a rotation that worked after Jay Ajayi tore his ACL in Week 5. Despite having an offensive line featuring Jason Peters, Jason Kelce, Brandon Brooks, and Lane Johnson, the Eagles averaged just 3.9 yards per carry — 30th in the NFL.

To fix the issue, they made a trade for Jordan Howard with the Chicago Bears and drafted Penn State running back Miles Sanders in the second round.

Unlike his first two years in the league, Howard failed to reach 1,000 yards in 2018, but he’s still better than the running backs the Eagles had last year. Howard should be able to get up to speed rather quickly, too. Both his former coach (Matt Nagy) and his new one (Doug Pederson) worked under Andy Reid in Kansas City and run similar offensive schemes.

Sanders is an athletic running back who can do a bit of everything. He can generate explosive plays on the ground and through the air — he chipped in 24 catches to go along with 1,274 rushing yards in 2018.

Now that the Eagles have retooled their running backs, they have one of the most complete offenses in the NFL: an all-star offensive line, two studs at tight end, and a talented, diverse group of receivers. Their season hinges on Carson Wentz staying healthy, but this offense is poised for a playoff run.

The only real hole the Falcons had on offense going into the season was their offensive line, and they were aggressive as hell to get it fixed.

Atlanta surprised everyone by picking Boston College guard Chris Lindstrom with the 14th pick in the draft. It made another splash by trading back into the first round to grab Washington offensive tackle Kaleb McGary.

It’s unclear whether Brown or Carpenter will be a backup, but both rookies are projected to start. For what it’s worth, Brown has never played left guard during his time in the NFL. If Carpenter ends up in the starting lineup, that will give Atlanta five first-round picks along the offensive line.

The Falcons found depth and long-term starters to protect franchise quarterback Matt Ryan, who probably won’t get sacked 42 times again like he did last season. Head coach Dan Quinn felt like they needed to improve their offensive line to get back into the playoffs after a year off. Now they have the players to be more consistent in the trenches.

The Packers needed to revitalize their defensive line. After releasing former first-round pick Nick Perry and losing Clay Matthews to free agency, they had holes to fill on the front line of their defense.

The Packers already had two notable names returning to their defensive line — Mike Daniels and Kenny Clark — but their front office clearly felt like they needed a major infusion of talent. As a result, Green Bay gave out two big contracts on the defensive line, signing edge rushers Za’Darius Smith and Preston Smith.

The Packers didn't stop there. With the 12th pick in the draft, they made a bit of a surprise pick with Michigan defensive end Rashan Gary. He’s a raw player, but he’s ridiculously athletic. Gary ran a 4.58 40-yard dash despite weighing 277 pounds.

Those three players give defensive coordinator Mike Pettine a ton of flexibility to get creative with his fronts. Pettine’s scheme heavily relies on man coverage — adding defenders who can defeat blocks will force more errant throws for Green Bay’s young secondary.

In theory, that should create more turnover opportunities for the Packers’ defense, giving the ball back to Aaron Rodgers. Chaos in the backfield and turnovers can be what gets this defense, and this team, back to being playoff caliber.

This offseason, San Francisco needed to upgrade its pass rush, which hasn’t finished better than 23rd in sack percentage in each of the last two seasons. DeForest Buckner has turned into a legitimate star at defensive tackle, but the 49ers have been lacking an edge rush since Jim Harbaugh was their head coach.

They made two big moves to boost their defensive end spots for 2019 and beyond. First, they traded a 2020 second-round pick to the Chiefs for pass rusher Dee Ford — and immediately gave him a five-year deal.

The next move was to take Ohio State defensive Nick Bosa, who very well might be the best player out of the 2019 NFL Draft, with the second overall pick. With Ford and Bosa joining Buckner, the 49ers finally have a defensive line capable of taking over games. The additions should also help them defend against Russell Wilson and Kyler Murray, the two mobile quarterbacks in their division.

With a disruptive defensive line and Jimmy Garoppolo returning back from injury, the 49ers have a chance to put together their first winning season since 2013.