Which current players belong in a different era of the NFL? 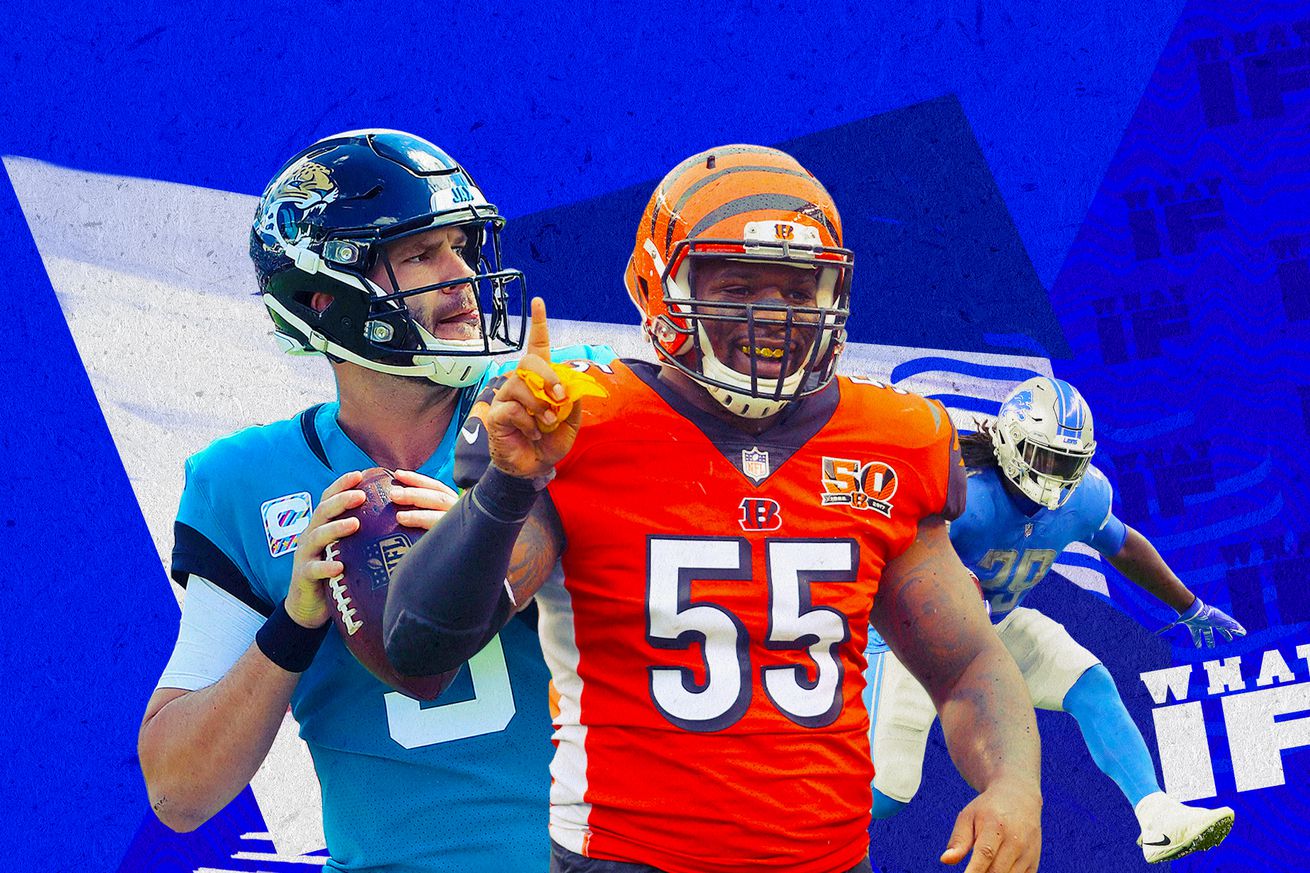 Trent Richardson was an All-American running back during a prolific career at Alabama, but he’ll probably be best remembered as an NFL Draft bust.

Richardson lasted only three seasons in the NFL, despite being drafted third overall by the Cleveland Browns in 2012. He averaged 3.5 yards per carry in Cleveland and then 3.1 yards for the Indianapolis Colts after he was traded during the 2013 season.

Browns legend Jim Brown turned out to be right when he described Richardson as an “ordinary back” on draft day. But maybe the problem is that Richardson came to the NFL about 50 years too late. If he had been in the NFL in the 1960s, Richardson could’ve had a Jim Brown-esque career.

The combination of power and speed that made Richardson a star at Alabama would’ve been significantly more effective in the NFL back when defensive tackles weighed less than 250 pounds.

For that matter, there’s probably a long list of NFL busts who would’ve dominated if only they had access to a time machine.

The NFL of 2019 is much different than it was in 1969. The emphasis on passing has meant more speed on the field, and the evolution of linemen has produced gigantic players on both lines. There’s a good chance some of the best players from the 1960s would still be productive now, but there’s an even better chance that most players today would be unstoppable then.

So which players who aren’t stars in today’s NFL would be MVP if they traveled back, say, 50 years? Let’s take a stab at it:

Bortles would still be the quarterback of the Jacksonville Jaguars if he knew how to avoid big mistakes. Since he entered the league five years ago, he’s thrown an NFL-most 75 interceptions. In Jacksonville, Bortles bounced passes off feet and helmets, he didn’t have much regard for the line of scrimmage, and his growing list of bloopers and turnovers eventually got him jettisoned from the team.

If Bortles could’ve played a few decades earlier, his turnover issues and 80.6 career passer rating probably wouldn’t be a big deal. Instead, he was born in 1992, which means he plays when interceptions are much more unacceptable.

In 2018, no player threw more than 16 picks, and there were 22 starting quarterbacks with a passer rating over 92. Yet Hall of Fame quarterback George Blanda threw 42 (!) interceptions as a member of the Houston Oilers in 1962 and was still an AFL all-star. Bart Starr led the NFL with an 89.9 passer rating in 1969.

And during an era when Fran Tarkenton pioneered the idea of a dual-threat quarterback, Bortles would’ve thrived. For all his faults as a passer, Bortles is an excellent runner — his career 6.3 yards per carry average is one of the best a quarterback has ever had.

In another time, he’d be a 6’5, 236-pound destroyer capable of running through and over defenders, or passing over them. It’d be the closest thing to a real life CLARENCE BEEFTANK.

It hasn’t all been bad for Bortles in today’s NFL. He threw a franchise-record 35 touchdowns for the Jaguars in his second season, and he led the team to the AFC Championship Game in January 2018. Jacksonville was happy enough with his play to give him a three-year, $54 million extension that offseason. One year later, the Jaguars were lousy again and decided — or realized the obvious — that the contract was a mistake and cut ties with Bortles. Now, he’s a backup quarterback for the Rams.

Bortles wouldn’t have made the same money in the 1960s, but he’d have a way better chance of having Hall of Fame aspirations.

John Ross’ inability to stay healthy would presumably be a problem no matter the decade. But even when the top-10 draft pick has been on the field, he’s been pretty terrible.

Knee and shoulder injuries cost him most of his rookie year, and he failed to catch a single pass when he was on the field. While Ross got more playing time in 2018, he only caught 21 passes for 210 yards — despite getting targeted 58 times.

No player in the NFL had a lower catch percentage and no receiver got a lower grade from Pro Football Focus. So far his record-breaking speed hasn’t translated into game-breaking plays for Cincinnati, and he was even reportedly on the trading block at one point.

Whoowee — he’d be soooo fast 50 years ago, though.

It’s hard to judge exactly how much faster Ross would be than everyone else because the NFL Combine didn’t start providing officials times and measurements until relatively recently. Logically, he’d be fast as hell. Players in the NFL are bigger, faster, and stronger than ever. That makes it all the more impressive that Ross is the record holder in the 40-yard dash.

Still, his 4.22-second speed might be comparable to Olympic-level speed in another era.

Cowboys receiver Bob Hayes was a world-class track athlete who won gold in the 100 meter at the 1964 Olympics with a then-record time of 10.06 seconds. His speed made him a dynamic receiver and punt returner who was so dangerous that teams were forced to develop zone defenses to contain him.

Would Ross be faster than that? It almost feels disrespectful to consider it, so let’s just say that even if he weren’t, he’d at least be in a similar tier of uncoverable speed. Hayes led the NFL in touchdowns in his first two seasons with 13 each. If Ross could stay healthy and actually, ya know, catch the ball, he could shred defenses too.

Not too long ago, Burfict was one of the best linebackers in football. It’s why he got a three-year, $32.5 million contract extension from the Bengals after a spectacular 2016 season. Then his play dropped off a cliff.

Burfict struggled through concussions and was one of the worst linebackers when he was on the field in 2018. He was released by Cincinnati after the season and joined the Raiders on a one-year deal.

But ask anyone what Burfict is really known for and they’ll talk about his reckless disregard for safety. He’s racked up over $4.5 million in fines over the course of his career and has been accused before of attempting to purposefully injure his opponents.

That’s a problem in today’s NFL — especially when the league is trying to combat backlash about the sport’s impact on the human brain. No matter how many times the NFL punishes Burfict with the hope that he’ll dial it back, he just keeps on being a danger.

That kind of player used to be celebrated. Even as recently as one decade ago, ESPN would showcase the most violent tackles of the week in a Monday Night Football segment called “Jacked Up!” Rewind another four decades earlier and mean, vicious defenders were some of the most revered players in the sport.

Dick Butkus was a 6’3, 245-pound mountain of intimidation for the Bears who went to eight Pro Bowls in his nine seasons in the NFL. His various nicknames listed at Pro Football Reference include “The Animal,” “The Enforcer,” “The Maestro of Mayhem,” and “The Robot of Destruction.”

Burfict would be right at home in a time like that when he could knock someone’s head off and get cheered for it. Not to mention the fact that his lackluster pass coverage would matter much less in an era without high-octane offenses led by coaches like Sean McVay and quarterbacks like Patrick Mahomes.

Unfortunately for him, the best linebackers now can control their aggression and cover from sideline to sideline.

The word “sack” didn’t even exist in football vernacular until Rams legend Deacon Jones started using it sometime around the late 1960s or early 1970s. Jones played before sacks became a recorded stat in 1982, but football historians think he accumulated about 173.5 — third all-time — during his career.

Since then, sacks have become an increasingly vital part of slowing down pass attacks in the NFL. Offensive tackles have had to hone their pass-blocking ability, and rushing the passer has become a refined art. Sacking quarterbacks in the NFL is hard and teams pour resources into finding the few humans capable of pulling it off.

For that reason, Bud Dupree only managing 20 sacks in the four seasons puts him dangerously close to bust territory. As a first-round pick, the expectation was that Dupree would have nearly double that sack total by now.

Transport a below-average pass rusher like Dupree to a time when offenses were just learning how to deal with scary defensive linemen and you could expect destruction. Dupree is 6’4, 269 pounds — similar in size to Jones — and probably wouldn’t have much trouble putting up Deacon Jones-type numbers back then.

Basically any running back

In the last 12 years, 11 quarterbacks have been named MVP. The last non-quarterback to win the award was Adrian Peterson when he cracked 2,000 rushing yards in 2012. When the Associated Press first started awarding the MVP award in 1957, running backs won five times in the first nine years.

That means there are fewer and fewer stars at the running back position today. There aren’t many roster spots to go around and the running backs who can actually earn carries are really, really good. They’re almost always productive members of the passing game, too.

Remember when I said Richardson might’ve been amazing if he played 50 years ago? All the guys in the NFL now are way better than he is.

LeGarrette Blount averaged only 2.7 yards for the Lions during the 2018 season. But put him against defensive tackles who don’t even outweigh him and he’d go on a rampage. So would other bruising types like Leonard Fournette, Latavius Murray, and Chris Ivory. Every running back in present day probably would.