Will Addazio’s BC ever win more than 7 games a year? 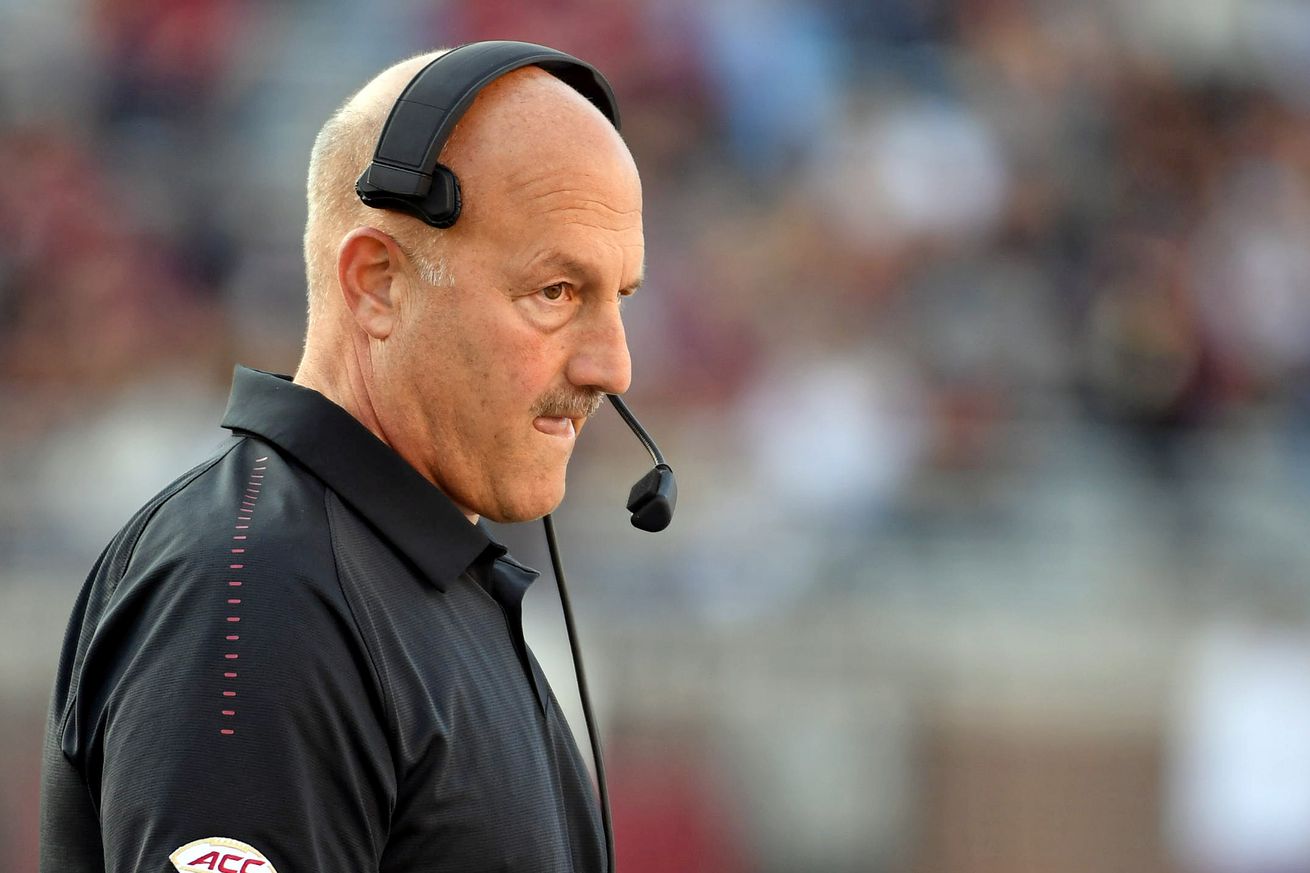 If the Eagles do stray from the seven-win script in 2018, bet the under.

I spend a lot of time, both in this preview series and on Podcast Ain’t Played Nobody, setting bars for different types of FBS programs. That’s strangely difficult for Boston College.

On one hand, it’s hard to create a winner in the Northeast. The talent isn’t as deep as in other areas of the country, as evidenced by both recruiting rankings — per the 247Sports Composite, the Eagles haven’t signed a top-50 class since 2011 — and by BC being neighbors with some of the worst G5 (UConn, UMass) and P5 (Rutgers) programs.

Plus, the Eagles were doomed by randomness and stuck in the ACC’s hard division. Nobody but Clemson or Florida State has won the Atlantic Division since BC did it in 2007-08. (BC fans should be among the nation’s biggest pods advocates.)

On the other hand, BC bowls damn near every year. The Eagles have only been home for the postseason three times in the last 20 seasons. While they stumbled in Frank Spaziani’s final two seasons as head coach, Steve Addazio quickly engineered a rebound. He’s been to five bowls in six years, and it took horrible close-games luck and countless QB injuries in 2015 to miss going 6-for-6.

You’d like to see improvement, though. While Addazio has established a physical identity and beaten plenty of blue bloods (USC, Florida State, Miami), his Eagles are what they are. They have finished between 53rd and 73rd in all six of his seasons on the Heights. They have flashed higher ceilings, spending parts of early-2015 and early-2018 in the top 30, but they haven’t sustained it.

Typically, in fans’ eyes, if you’re not rising, you’re falling. But BC home attendance has risen 25 percent since 2015’s odd stumble. It improved dramatically in 2017, with a home schedule that included Notre Dame, Virginia Tech, and FSU, but in 2018, without this trio, it improved even further.

So to summarize: BC should expect bowls every year but should never even dream of a division title. The Eagles are stagnating on paper but rising in attendance.

None of that makes sense, and it makes it awfully hard to evaluate how Addazio is actually performing. He quickly dragged BC out of the post-Spaziani muck, and his teams at least slightly punch above their recruiting weight class. But he hasn’t improved recruiting, and while he’s bowled nearly every season, he still hasn’t cleared the bar set by Tom O’Brien (7.6 wins per year) or Jeff Jagodzinski (20 wins in two seasons).

Chances are, then, that we know what BC is going to end up doing this fall. S&P+ projects six wins and another ranking in Addazio’s typical range, after all.

The nature of BC’s returning production, however, is intriguing. The Eagles bring back quarterback Anthony Brown and maybe the most intriguing skill corps they’ve had in quite a while, one that includes 250-pound, 1,100-yard rusher AJ Dillion and a couple of true home run hitters in receiver Kobay White and utility man Ben Glines.

At the same time, they have to replace two star defensive ends (Zach Allen and Wyatt Ray combined for 26.5 tackles for loss and 15.5 sacks), their leading tackler (linebacker Connor Strachan), and almost all of last year’s starting secondary. The offense is projected to improve, but the defense is projected to regress considerably.

Over the last four seasons, BC has averaged a 103.3 ranking in Off. S&P+ and a 21.0 ranking on defense. Returning production suggests this could be the Eagles’ best offense in a while, and if the floor for the defense is high enough despite the turnover, this could be a top-40 team. At the same time, if the ceiling for the offense remains low and the defense collapses, this could be a barely-top-80 team.

So maybe there’s some change coming, one way or the other?

Nah. I’m just going to assume BC ends up with seven wins until proven otherwise. 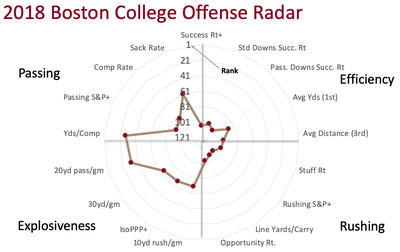 BC might end up in about the same place every year, but last year’s journey to Same Old, Same Old was circuitous. The offense spent much of the season hinting at something far greater before succumbing to BC-ness.

Granted, the schedule had a role there. The first two games were against UMass (124th in Def. S&P+) and FCS Holy Cross, while Clemson (third in Def. S&P+) showed up in the last three. But the percentile performance figures above are opponent-adjusted — there was still a clear downward shift.

Both run and pass struggled. Dillon went from averaging 7.5 yards per carry in the first three games, to 4.5 in the middle six (in which he missed two games with an ankle injury), to 3.2 in the final three. Brown’s passer rating went from a Heisman-level 240.2 in those first three games to a miserable 109.2 the rest of the way. (He battled a hand injury late in the year, but the slide began long before.) 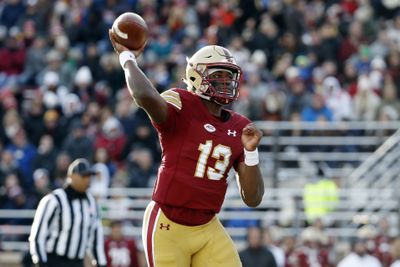 BC ended up 114th in marginal efficiency and 27th in marginal explosiveness. Being so all-or-nothing, so reliant on big plays, makes you volatile and gives you a high ceiling, a low floor, and little consistency.

In theory, continuity at quarterback could create a bit more consistency. Brown is a two-year starter, and even if much of his 2018 success came against the Holy Crosses of the world, he still improved as a sophomore.

Brown loses tight end Tommy Sweeney and a particularly all-or-nothing target in Jeff Smith, but White had emerged as BC’s best all-around receiver by the end of the year, and in Glines and Travis Levy, he’s got a pair of security-blanket options, when they’re in the backfield in place of Dillon. 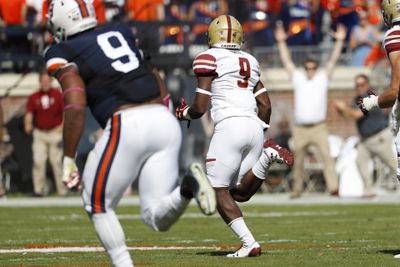 BC had two different offenses: one when Dillon was in the game and one when he wasn’t.

The Eagles were extremely predictable with the bruiser in the backfield. His rushing success rate was only 39 percent (Glines: 52 percent), and he was in no way a receiving threat (41 yards in 12 targets).

If you couldn’t stop Dillon, you had no chance of beating the Eagles (he averaged 5.9 yards per carry in wins), but if you could (3.2 per carry in losses), BC was reluctant to go to Plan B. When forced to change the script in Dillon’s absence, the Eagles averaged more than 30 points per game.

With quite a bit of turnover up front — those responsible for 41 of last year’s 60 line starts are gone, and Miami grad transfer Hayden Mahoney will likely be asked to star immediately — there’s no guarantee that Plan A will work even as well as it did last year.

When coordinator Scot Loeffler was somewhat inexplicably hired away as Bowling Green’s head coach, it gave Addazio a chance to modernize a hair. He chose against it, instead hiring Mike Bajakian, Butch Jones’ former OC at Cincinnati and Tennessee who spent the last four years as a Tampa Bay Bucs position coach.

Don’t expect much change. That’s unfortunate because some more early-down passing, and some more chances for Glines and Levy, could work wonders. 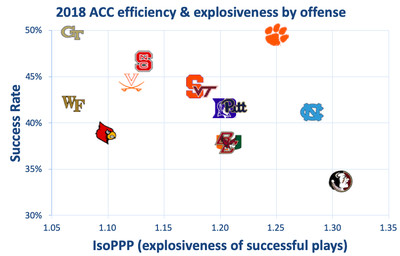 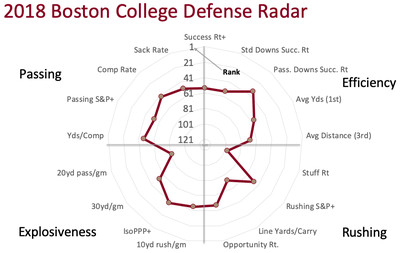 Addazio made an interesting change atop his defensive coaching staff this offseason: coordinator Jim Reid, a nearly 50-year coaching veteran, took a demotion to defensive ends coach, and linebackers coach Bill Sheridan, a former NFL coordinator for the Giants and Bucs, got promoted to DC in his second year in town.

BC’s defense had regressed since former DC Don Brown left for Michigan — the Eagles were fifth in Def. S&P+ in his final season and were between 24th and 32nd in three seasons with Reid. Still, 32nd ain’t bad, and I’m assuming this move was at least in part because of Reid’s advancing age. 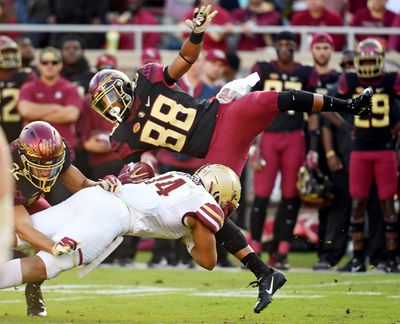 Sheridan has some turnover issues to deal with in his first year in charge, and while turnover in the secondary tends to have an especially direct impact on your Def. S&P+ rating, I’m almost as concerned about BC’s front.

By the Eagles’ standards, they were mediocre against the run last year, ranking just 48th in Rushing S&P+. Reid only felt comfortable playing his starters — only four linemen had more than 11 tackles, and only one of those four (tackle Tanner Karafa) now returns. Regressing, then losing most of your contributors, makes for a scary double-dip situation.

The linebacking corps could pick up some slack, even without Strachan. Sheridan has to hope so, anyway. Juniors Isaiah McDuffie, Max Richardson, and John Lamot all return, and Richardson was even more of a play-maker than Strachan. Plus, redshirt freshman Vinny DePalma looked fantastic in run defense in a three-game audition, and incoming freshman Shitta Sillah was maybe the jewel of the 2019 signing class. 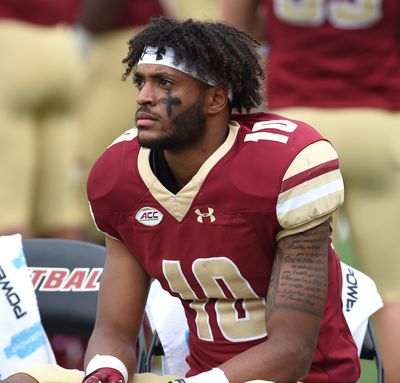 If the front seven can at least hold steady, that’ll give BC a chance to address the OTHER concern. BC usually boasts an excellent DB or two, but corner Hamp Cheevers, now a Tennessee Titan, was particularly strong. He and another departing cornerback, Taj-Amir Torres, combined for 10 interceptions and 18 breakups, and safeties Will Harris and Lukas Denis are gone as well.

Sophomore cornerback Brandon Sebastian is back, at least, and there’s still a veteran presence at safety with senior Mehdi El Attrach and junior Mike Palmer. But with any injury, BC will be dipping pretty heavily into a large pool of true and redshirt freshmen. Again, the floor for the BC defense might be high enough that the drop-off is manageable. But there will probably be a drop-off. 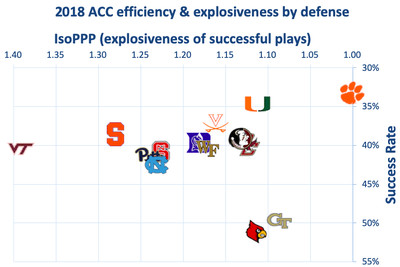 Addazio has done himself no favors with special teams. The Eagles were ninth in Special Teams S&P+ in his first season but fell to 69th in 2014, 90th to 91st each year from 2015-17, and a dismal 118th in 2018. And that was with an excellent return man in Michael Walker, now gone. Punter Grant Carlson was 102nd in punt efficiency, and he’s the most proven of BC’s returning ST personnel.

S&P+ sees BC’s defense regressing more than its offense improves, and the Eagles are projected to slip from 63rd to 72nd overall, and from seven wins to closer to six. To believe something more ambitious, you have to believe that either the defense is slip-proof or that the offense has a much higher ceiling than it’s shown over the last four years.

The order of operations is interesting, though. After a season-opening visit from Virginia Tech, BC is a projected favorite in each of its next five games ... and then an underdog in the last six. There are some relative tossups in there, but the odds of a fast start and tough finish are solid. (The Eagles are used to this: they started 7-2 last year, hosted GameDay, and then collapsed, after all.) 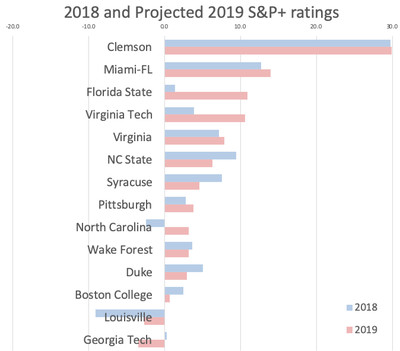