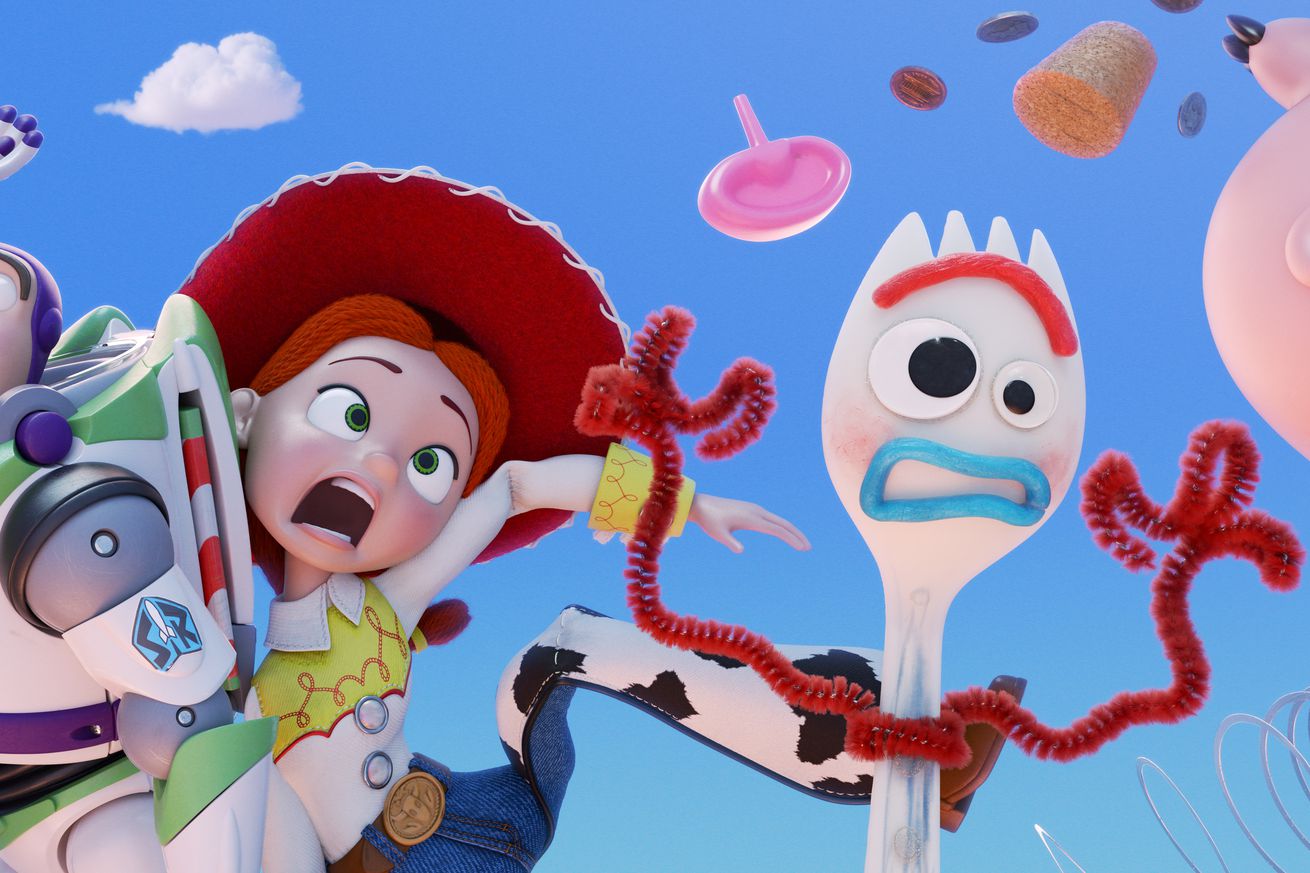 Toy Story 4 debuted in a world that’s changed profoundly since the original Toy Story hit theaters nearly 25 years ago. Toy Story was the first-ever entirely computer-animated film; now CGI animation is common, and the hand-drawn cel animation it replaced is a shrinking rarity. Toy Story was considered a huge success because it made more than $300 million at the box office; the newest sequel was considered a mild disappointment because it didn’t meet the outstanding projections for its performance, meaning it only brought in $1 billion.

But more significantly, Toy Story dropped into a world where Pixar Animation Studios was still an unknown, rather than an industry-shaping inspiration. Expectations for the first Toy Story were modest. Expectations for Toy Story 4 were outsized in part because Pixar has been such a powerful industry force over the last 25 years, and the Toy Story series in particular has been such a critical, aesthetic, narrative, and financial success. It was a major legacy to live up to with a third sequel. With Toy Story 4 coming to home video, first-time feature director Josh Cooley — a Pixar vet who’s worked as a storyboard artist, writer, and shorts director on projects from Ratatouille, to the Cars movies, to Up and Inside Out — talked to The Verge about the biggest challenges on the film, from specific story beats, to character design, to making the perfect virtual spider.

What was your biggest challenge on Toy Story 4 from a technological perspective?

Josh Cooley: It would definitely be the antique store. We have about 10,000 items in that store, and each one had to be shaded and built and rendered, so there’s a lot of information for the computer to wrap its head around. And we knew we were going to be in that antique store for a big chunk of the film. There’s also dust, and spiderwebs, and all this detail. So at first, we weren’t even sure we would be able to fill a store that big with that much stuff. The tone I really wanted was like a jungle, like a crammed city jungle, just a lot of stuff, how the stores are. We did a test a couple summers earlier, and we were able to make it work, so it seemed like would be possible.

You’ve said you put a lot of visual Easter eggs in the antique store because you got “lazy,” so you put in renders of things like Bing Bong’s rocket from Inside Out. What else should viewers watch out for on home video?

[Laughs] I should verify that it wasn’t out of laziness. That was just a joke. We do actually have to re-render everything, it’s not as easy as just clicking and dragging something from an old film. We have to start over again every time. But my favorite thing is, in one shot, there’s a casting of a hand in the background. And that is Ed Catmull’s hand. Ed’s the [former] president of the studio, and it was the very first computer model that was ever created. He did it as like, a project in school. I think they even used it in Star Trek: Wrath of Khan or something. [Catmull worked on the film’s computer-generated Genesis simulation.] So we made it into a plaster statue that you can purchase at an antique store.

Talking to Pixar over the years about its evolving technology, we’ve heard a lot about your light-renderers and how they change the textures of your world. How does your lighting interact with something as visually complex as spiderwebs?

Yeah, that’s a great question. I’m not exactly sure even how that works. I do know they had to build, basically, a virtual spider to design the webs realistically. They’d say, “Where exactly would you like to have spiderwebs?” And I’d point on the screen where I’d like them, and then they would send the spider into action that would create natural-looking spiderwebs. It was insane, it was amazing. To be able to direct that side of the film, the technological side, all I had to do was talk about the emotion I wanted, and the animators would go do their magic and come back and show me incredible stuff. It was like a magic trick. It was insane.

What was the hardest sequence to plan and design?

The big action scene in the store, when they’re rescuing Forky out of the cabinet. That was a tough one. There were a lot of moving parts, a lot of characters. The staging had to be very clear as to where the characters were. We use the lighting to help sell that. The light coming in from the front of the store is casting into the store, so in the beginning, Woody and the toys are in shadow, and then when they get into the cabinet, the light’s streaming in. So we really made a difference between the two parts of the set they were on. But there’s a lot of action, a lot of story beats within that action scene that had to be very clear. So that was a tough one.

What about from an emotional perspective? What was hardest to convey when you were trying to break down the narrative and get the script set?

Probably the Bo and Woody relationship. Overall, we kept a real close eye on it. It was so important. Because this is a movie about their relationship, we looked at a lot of movies about relationships. Often there’s not a lot of dialog to establish a relationship. It’s mostly the looks between actors and the chemistry you can feel when you’re seeing how someone will look at someone else for just an extra little beat. Really subtle little things. And so, whenever we had moments like that, we made sure when we were animating it to bring everybody into the room at the same time and look at all the shots back to back. We wouldn’t just look at a single shot, like we tend to do. We’d look at the whole scene in whatever state of animation it was, just to make sure that every beat was being timed correctly and was being acted in the correct way.

The boldness of the ending was a big surprise to a lot of fans of the franchise, but Pixar just released an alternate ending that went in the exact opposite direction, and it apparently got as far as the animatic stage. What kind of conversations did you have about how you wanted to end the film?

Well, the very first version — this was always just in animatics — all the toys, including Bo, came back to Bonnie’s house at the end, and it was kind of like, “Bonnie has a new lamp now, and everything’s reset the way it was, but now with Bo in the picture.” And it just wasn’t emotionally satisfying. We didn’t really learn anything in that version.

So we thought, “Let’s see what happens with a Casablanca-type ending, where they love each other, but they know they have different duties they have to perform now.” So that’s what you saw in the deleted scenes. And that wasn’t satisfying, either. And then we went on to the next step, which was, “Let’s see what it looks like if they both don’t return.” I had this thought — I remember walking through this pitch with the producers. Just talking about him staying with the love of his life and saying goodbye to his friends, and saying “To infinity and beyond!” with Buzz, my voice cracked with the emotion of that moment. I could feel that. So I was convinced that if I could put that emotion on the screen, it could mean something.

What were the biggest challenges in the design stage, particularly in designing Ducky and Bunny?

Well, the great thing is — my production designer, Bob Pauley, was a designer on the first Toy Story. He actually designed Buzz Lightyear. So he came in with the design aesthetic, knowing the world. Toy Story is all about exaggerated shapes seen from low perspectives, because that’s where the characters are going to be most of the time. He knows theatrical lighting and realistic textures are the things that defined Toy Story. With Ducky and Bunny, I said, “These are carnival toys. Most carnival toys are crappy. They don’t look like you can really hug them, because they’re made of this awful material that’s really cheap. These guys are designed to be as cute as possible, which will contrast perfectly with their actual personalities. So the designers showed me tons of different designs of cute animals, and we narrowed it down to two, who are attached and have these off colors, you know, with a bright blue Bunny and such.

Forky is a new visual element for this world, and he has to look like trash but still be a personable, relatable character. What were the discussions around his design?

There weren’t that many! [Laughs] He’s very simple, which is what I love about him. When we first started speaking about an artcraft becoming a toy, the very first drawing, I think, was of a spork. And when we all saw that, we all just kept drawing sporks with different types of arms and legs. It was just that sporks are funny. In a weird way — we didn’t even plan this, but the idea of a spork being a fork and a spoon also complements the idea that he’s trash and a toy at the same time. Even in his creation, he’s not even sure what he is. So there was just something really funny and entertaining about that.

People take Pixar movies so seriously, debating your timeline and your philosophy and so forth. And Forky freaked people out because they’re saying, “So can anything be a toy? Can anything in this world come to life, and then it’s alive forever?” Do you guys have these kinds of philosophical discussions? Did you talk about what Forky was doing to your world?

Oh yeah! That’s how he was born. We were in a room talking about our own kids, and how the rules of Toy Story are that toys come to life. We said, “Well, our own kids in real life, they will pick up a rock and play with it. If Bonnie does that, does that mean the rock’s alive?” So we started pulling the threads on the universe. But then we were like, “Well, wait, let’s embrace that! Let’s say what would happen!” And the fact is, that thing that was not a toy would come to life. It has never seen Toy Story 1, 2, or 3, so it doesn’t understand any of the rules of the world. And we were just busting ourselves up with how ridiculous that was.

But also just the fact that the audience is coming in with all this knowledge of Toy Story. So to have a character show up that doesn’t understand it gives you so much leverage, comedy-wise. But also, it allows you to have an innocent character that can force Woody to explain what it means to be a toy. And then we could say, “Oh, now he’s supporting Woody’s story. Now there’s a real reason to have him in the movie.”