Nicki Minaj isn’t anti-vax, exactly. That’s why her vaccine resistance is so concerning. 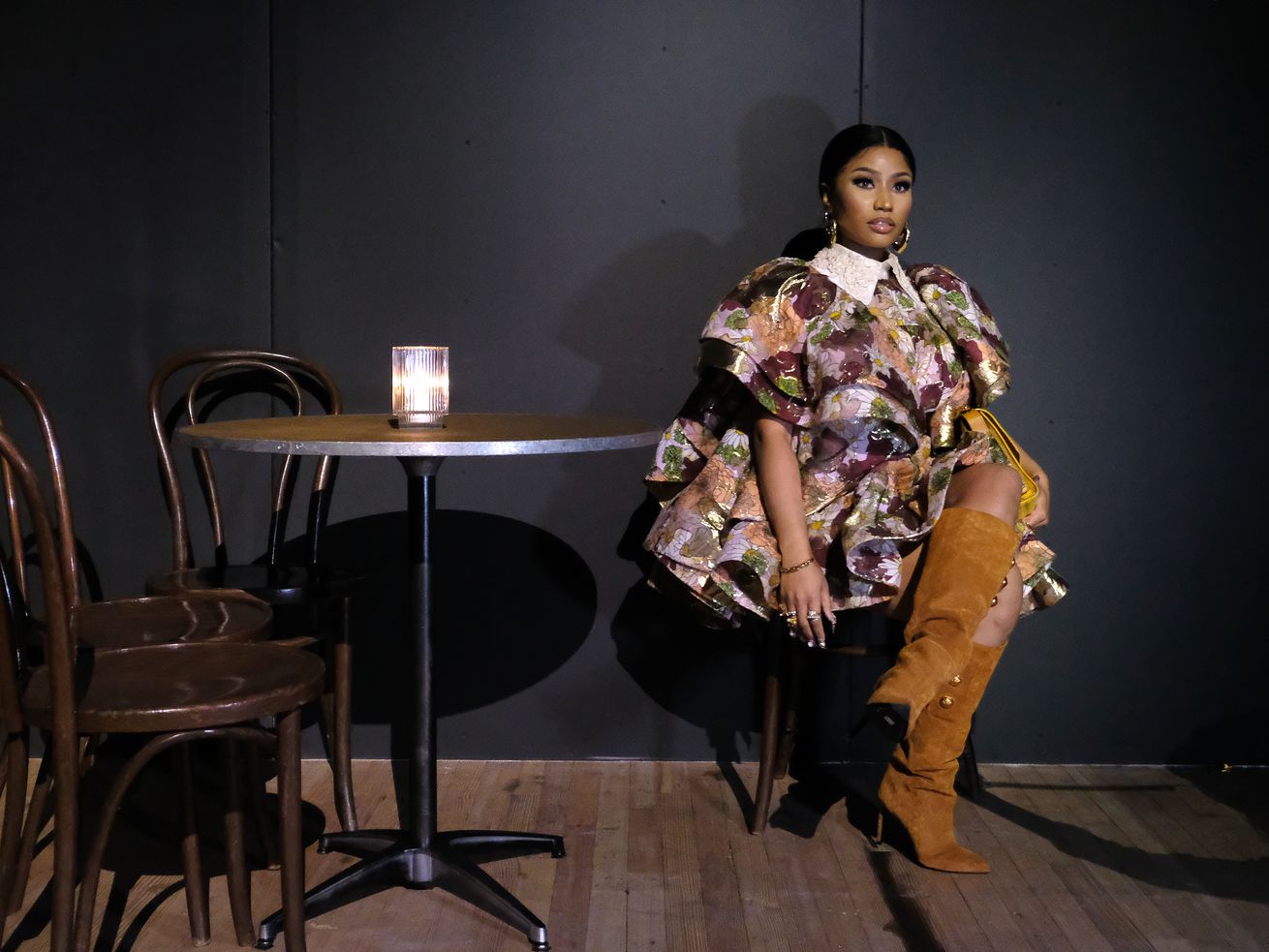 Minaj, under the guise of urging vaccine caution, is helping mainstream a dangerous form of anti-science.

For many people, Nicki Minaj’s scene-stealing tweets about why she chose not to attend the Met Gala Monday night were peak comedy. Minaj told several people on social media she’d chosen not to attend the haute couture event because of its requirement that attendees be vaccinated against Covid-19. After she explained her hesitancy in a baffling, instantly viral tweet involving swollen testicles and a canceled wedding, some ignored the more concerning parts of Minaj’s argument in favor of laughing.

While it’s tempting to just focus on the absurdist meme potential of Minaj’s tweets, Minaj’s approach to the vaccine is deeply concerning, both because it reflects a widespread distrust in public policy, health, and science experts and because it presents a cautionary mindset regarding vaccines as a sort of reasonable “middle ground” in the fight between science and anti-vax ideology.

So far, about three-quarters of US adults are at least partially vaccinated against Covid, but many of the rest remain reluctant. As vaccinations become mandatory in many workplaces and schools, and people who are reluctant start discussing their anxieties, Minaj’s cautionary, individualistic approach to getting vaccinated might seem relatable and even reasonable. But this is still a highly dangerous approach rooted in misinformation and a concerning distrust of science.

We might think of it as the mainstreaming of “vaccine caution,” and it’s arguably just as dangerous as outright vaccine science denial.

Did Minaj’s cousin’s friend’s fiancée really call off their wedding because he got vaccinated?

On Monday afternoon, Minaj responded to a tweet from a fan lamenting her lack of recent public appearances by noting she didn’t want to risk her infant’s health during the pandemic. A few interactions later — including one in which she claimed Drake told her he contracted Covid-19 despite having gotten the vaccine — she tweeted, “They want you to get vaccinated for the Met. if I get vaccinated it won’t [be] for the Met. It’ll be once I feel I’ve done enough research. I’m working on that now.”

They want you to get vaccinated for the Met. if I get vaccinated it won’t for the Met. It’ll be once I feel I’ve done enough research. I’m working on that now. In the meantime my loves, be safe. Wear the mask with 2 strings that grips your head & face. Not that loose one ♥️

Since it’s combined with the invocation to wear a mask — advice given by experts who’ve endorsed vaccines — Minaj’s wary approach to the vaccine is a bit confusing. However, it’s nothing compared to what she followed it up with. Apparently, a big part of her reluctance to get vaccinated was based in part on the fate of her Trinidadian cousin’s friend’s nuptials:

My cousin in Trinidad won’t get the vaccine cuz his friend got it & became impotent. His testicles became swollen. His friend was weeks away from getting married, now the girl called off the wedding. So just pray on it & make sure you’re comfortable with ur decision, not bullied

Just to spell it out, known side effects of the Covid-19 vaccine do not include testicle swelling (although unfounded concerns about the vaccine and female fertility have circulated). Without more context about Minaj’s cousin’s friend’s illness, it’s impossible to know more — but it seems highly unlikely his situation had anything to do with Covid-19.

Naturally, this kind of left-field reasoning was widely ridiculed across social media, and Minaj quickly made headlines for peddling coronavirus conspiracies. Yet even as people were lining up to make STD references and Met Gala memes, many of Minaj’s fans were responding supportively — especially to her statement about “doing the research.”

“I read up on all the research for MONTHS before I chose to get it,” one reader responded, referring to the vaccine. “Everyone has the right to read the information given by the FDA and doctors before they take the shot right?”

This belief underlies Minaj’s argument, and it seems to be one that’s held by many other people with similar levels of mistrust in vaccine science.

The problem with “doing one’s own research” is that, as Minaj’s tweets reveal, many people — who haven’t spent years researching viruses and vaccines — don’t have the scientific knowledge needed to evaluate vaccine efficacy without the help of experts. A huge part of the effort to curb Covid-related misinformation has been about trying to get people to understand that vaccination “research” isn’t something many people can just sit down and do on their own. Trying to do so may lead the researcher to pockets of misinformation that result in a citizen being more poorly informed, not better informed, about the actual health risks of vaccines.

In fact, this kind of thinking can be a direct route to begin interacting with and possibly believing in a wide range of conspiracy theories, mainly because there is so much misinformation and disinformation about highly complex subjects, including Covid-19.

It doesn’t help that some of that disinformation has come from trusted public institutions — including, during the Trump administration, directly from the US president.

What Minaj’s opinions represent, then, isn’t just her individual lack of knowledge giving rise to wariness over the vaccine. Her fear has been bolstered by years of anti-vax campaigns, as well as general public lethargy about actually getting vaccinated.

Minaj’s pushback against pro-vaccine rhetoric isn’t unique to her by any means. Black communities have endured centuries of being ruthlessly exploited, lied to, and sometimes used in unethical medical experiments without their knowledge or consent. They’ve been subjected to blatantly racist medical practices, all while continually bearing some of the worst effects of health epidemics, including Covid-19.

With systemic factors leading to a hugely unequal Covid-19 death toll among Black people last year, and false claims about Covid vaccines continuing to spread, there is substantial mistrust of Covid-19 science among some Black Americans. If Nicki Minaj among that group, can she really be blamed for it?

Well, yes and no — because Minaj’s tweets arguably have a powerful influence over the way her 22 million Twitter followers approach the subject of vaccination. If Minaj’s faith in science and health officials has been undermined, and she’s subsequently encouraging followers to trust their intuition over that of health experts, she’s promoting a distrust of science in general that could have seriously damaging repercussions.

What Minaj seems to be arguing for, however, isn’t outright vaccine rejection. She even went on to say, “I’m sure I’ll [be] vaccinated as well cuz I have to go on tour.” Her cautionary, individualistic approach to getting vaccinated, however, might still do damage.

Minaj immediately began attempting to soften her harsher statements about the vaccine. She asked her followers which vaccine they’d recommend, and commented that taking the vaccine with no side effects is “the norm.” She also went on to say she “def recommend[s]” that people whose jobs or countries mandate vaccination do so, and admitted she’d probably get the vaccine herself. She also reiterated that her main reason for skipping out on the Met Gala was to protect her 1-year-old son.

She then pointed to a couple of her own tweets to argue that she had never expressed opposition to the vaccine. Minaj’s support clearly seems to be aimed at preventing job loss in circumstances where the vaccine is mandatory. The subtext seems to be a reluctant acceptance that workers can’t always be able to choose to go unvaccinated, rather than Minaj enthusiastically supporting vaccination itself.

Minaj’s overall attitude seems to be a kind of wary caution and a “DIY” approach to science. That might reflect a new “wave” of vaccine rhetoric adopted by many people who don’t strictly identify as anti-vax but who are still reluctant to actually get their shot.

Surveys have found that most unvaccinated adults say they are unlikely to change their minds and get the vaccine. Others who have not gotten the shot may be “in-betweeners” — people who aren’t anti-vax but who are still in a kind of wait-and-see holding pattern.

These holdouts could make a substantial difference in how effective the Covid-19 vaccines can be. The higher the vaccinated population, the more the vaccines can reduce transmission of the disease. Fully vaccinated people can resume living their lives somewhat normally, and their confidence and health may likely help sway even those who’ve firmly decided against the vaccine.

Instead, Minaj’s “middle-of-the-road” approach might become a new avenue for expressing distrust in science while still acquiescing to the necessity of vaccination.

The problem with this is that the efficacy of vaccines never has been, and shouldn’t be, a matter of public debate. With the exception of the original scientific study that began the modern anti-vax movement, which used false and fraudulent research to create fear, vaccines have always been part of scientifically established medical practice. They are safe, effective, and necessary for combating the spread of countless viral diseases.

The “do your research and decide what’s right for you” approach that celebrities like Minaj seem to be endorsing is a disingenuous view. It undermines centuries of epidemiology and important work to fight diseases by suggesting that vaccine safety boils down to how you, personally, feel about vaccines. But the question of whether vaccines are safe isn’t up for debate. The answer is simple: yes.

Minaj’s reluctance to say yes is unfortunate — but it’s important to note she’s far from the only celebrity who’s waffled about vaccine efficacy, spread misinformation, or outright rejected the vaccine. Minaj’s tweets are particularly significant, however, because they weren’t totally anti-vax — and because they came at a moment when all eyes were on her because of her absence from the Met Gala. Thus, many, many people saw Minaj presenting personal ambivalence as an alternative to promoting and trusting science and being responsible about getting vaccinated.

We may be making “My cousin in Trinidad” jokes for a long while to come. The unfortunate influence of Minaj’s vaccine resistance could last even longer.